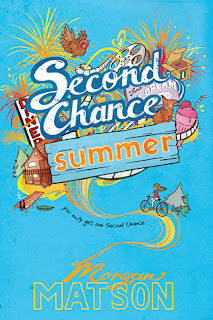 Taylor’s family might not be the closest-knit – everyone is a little too busy and overscheduled – but for the most part, they get along fine. Then they get news that changes everything: Her father has pancreatic cancer, and it’s stage four – meaning that there is basically nothing to be done. Her parents decide that the family will spend his last months together at their old summerhouse in the Pocono Mountains. Crammed into a place much smaller and more rustic than they are used to, they begin to get to know each other again. And Taylor discovers that the people she thought she had left behind haven’t actually gone anywhere. Her former summer best friend is suddenly around, as is her first boyfriend. . . and he’s much cuter at seventeen than he was at twelve. As the summer progresses, the Edwards become more of a family, and closer than they’ve ever been before. But all of them very aware that they’re battling a ticking clock. Sometimes, though, there is just enough time to get a second chance – with family, with friends, and with love.

After falling in love with Amy and Roger's Epic Detour last year, I've been anxiously awaiting Second Chance Summer and am over the moon that it managed to exceed my expectations. I'm in awe at how connected I was to the characters and felt every single emotion they were feeling. I cried too many tears while reading this book, during moments that probably didn't even warrant them, and was blown away by the depth Matson created with her layered stories and complicated characters. This is one of my favourite books this year, so I sincerely hope you enjoy it just as much!

Taylor Edwards and her family decide to spend the summer at their lake house together for the very last time. Her father has terminal pancreatic cancer and is predicted to have only 3 more months left to live. The once healthy and fit owner of a law firm is now slowly deteriorating before their eyes, but refuses to let them see his weakness, even though it's a futile effort. Taylor and her father have a very close relationship, a bond that you know will tear your heart out once its gone. Her siblings both have their own stories to tell in Lake Phoenix, from making new friends to falling in love, and the connection Matson forms between us all is immensely strong. She gets us so involved with the story that its impossible not to crash when the storm hits and every single one of them is affected.

The second main storyline in Second Chance Summer is Taylor's damaged relationships with her first love, Henry Crosby, and old best friend, Lucy Marino. They happen to meet up again this summer but the two are hostile, hurt and unforgiving of something Taylor did five years ago. What could it be? This question plagues us for the majority of the novel, slowly answering itself through suspenseful flashbacks and snippets of conversations, during which Taylor makes the effort to mend things between them. I loved the many steps forward and backwards we took to get from Point A to B, seeing relationships slowly change and heal, despite the immense toll it put on my heart. This is an emotional book that really rises above others through its characters and story; the depth I was talking about before. I can't even put into words how breathtaking these relationships were!

My heart stills thuds madly as I think back to the hurt, love and frustration this book made me feel. Matson truly brings us to the highest of highs and lowest of lows, all in the span of this one book. We experience every romance, every heartbreak, every friendship and every betrayal. I keep saying it but these characters have so much depth, which adds to the story's power infinitely. We truly care about what happens to them and are basically living within their bodies, feeling everything they are. It's crazy. Matson, what are you doing to me?!

There are numerous story lines in this book that demand to be paid attention to but Matson manages to balance them all PERFECTLY. I smiled and cried a lot while reading this, so have some emergency supplies on hand. I will never forget the final few chapters of this book - heartbreakingly beautiful and, hands down, one of the best endings ever. If you don't shed some tears, I'm calling you heartless! Matson never fails to get our hearts jumping out of our chests with these realistic characters of hers. Second Chance Summer is pretty much flawless and one of the best contemporaries I've ever read, so please put it at the top of your TBR pile immediately!

So after checking out Morgan's FAQ section, apparently there's a glimpse or reference to Amy and Roger in this book! I obviously missed it while reading but hopefully you can pick up on it now that you're aware ;) Morgan's contemporaries are amazing. I need a new one now!!

Find Morgan on Twitter, Goodreads, Facebook and her website.
Buy Second Chance Summer from Amazon, The Book Depository and Barnes & Noble.
Posted by Lisa at 7:00 PM