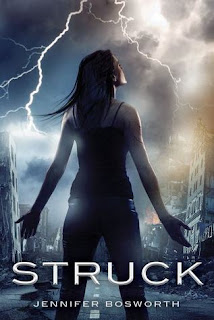 Mia Price is a lightning addict. She’s survived countless strikes, but her craving to connect to the energy in storms endangers her life and the lives of those around her. Los Angeles, where lightning rarely strikes, is one of the few places Mia feels safe from her addiction. But when an earthquake devastates the city, her haven is transformed into a minefield of chaos and danger. The beaches become massive tent cities. Downtown is a crumbling wasteland, where a traveling party moves to a different empty building each night, the revelers drawn to the destruction by a force they cannot deny. Two warring cults rise to power, and both see Mia as the key to their opposing doomsday prophecies. They believe she has a connection to the freak electrical storm that caused the quake, and to the far more devastating storm that is yet to come. Mia wants to trust the enigmatic and alluring Jeremy when he promises to protect her, but she fears he isn’t who he claims to be. In the end, the passion and power that brought them together could be their downfall. When the final disaster strikes, Mia must risk unleashing the full horror of her strength to save the people she loves, or lose everything.

Mia Price is addicted to lightning. It seems to find her wherever she is and even with her million scars and periods of baldness, she craves the feeling of crackling electricity running through her veins. After Mia moved to Los Angeles with her mother and younger brother, Parker, she had been hit-free for one year. Then, the city turned almost post-apocalyptic after a devastating earthquake...but little did she know that it was just the precursor to the real apocalypse that's looming around the corner. After the sixth seal is broken, the skies will open and kill everyone, except for those who pledge their allegiance to the Prophet, an evangelical television personality who claims to have a direct link to God himself. While Struck was much more based around religion than I expected, it was still an amazing debut that swept me up in its storm!

After their mother was diagnosed with Acute Stress Disorder from the earthquake, Mia and Parker are finally going back to school now that it's open again. Offering free lunches and more rations for those who attend, the fear of starving to death is much worse than leaving their mother alone for the first time. Immediately upon entering the school, we're made aware of the Seekers and the Followers, rivalry groups each with a secret agenda. While the Followers are loyal to the Prophet and demand that everyone else join their cult, the Seekers are more mysterious and it's a while before you discover who they really are. When I say the book is religious, I only mean that there's a strong religious group that's central to the plot and, well, the apocalypse has everything to do with religion. So don't get all worried that this'll be like going to Church because I think you'll find this book much more entertaining. Struck is extremely mysterious and filled with secrets that take a lot of effort to decipher. You'll love how complex the storyline is and Bosworth does an outstanding job with the world-building. I think every review you read for this book will praise that aspect because it's been done magnificently. What a realistic atmosphere!

Mia suffers from chronic insomnia and one night finds herself staring at the silhouette of a boy standing over her bed, poised with a knife in hand. She's alive by morning but thinks it's all a dream. When she meets Jeremy in her first English class the next day, she's taken by his intelligence, bravery and hot Clark Kent glasses. While we know that he was the mystery man…she doesn't and it's an absolute thrill to watch their love blossom. Although their secret attraction for each other is sizzling from the very beginning, Jeremy hides himself from her and we're left in the dark as to who he really is. Why did he try to kill her? If he hates the Seekers but tells Mia to avoid the Followers too, which side is he on? What's his agenda? Intense plot aside, Jeremy will make you swoon with his protectiveness and downright delicious kisses. He's so hot that he makes Mia faint every time he touches her. *coughs* Okay, so it's for another reason but STILL. These two made a fantastic couple and all of the different sides to it? GOLD!

All of the characters were written extremely well. So many times I wanted to strangle Mia's mother for being so negligent and blindly devoted to the Prophet. Parker had a strong personality and his willingness to disobey his sister…very brave and stupid at the same time. I thought that the characters from the Seeker and Follower groups were all unique and well developed also! I really can't say much more than that without going into detail and ruining all of the fun for you! I love that we're left to wonder about which characters we can trust, especially since the prophecy says that both groups will try to use Mia for their own benefit. To what extent and for what reason? It's a mystery! Mia herself is an exceptionally strong and thoughtful character you can't help but love. Everyone, give Bosworth a hug for her fabulous effort!

Struck is a truly amazing book that will impress many with its strong world-building, exciting storyline and addictive characters. With a perfect blend of realism and religious mythology, you'll feel as if you've stumbled onto something grand, as prophecies always are! Watch the fight between destiny and free will play out, and pick your side for the fight. It's not until the very end that we receive answers to all of the questions that have been piling up from page one, and boy are there some epic twists along the way. The book is exhilarating from beginning to end, which is why I was admittedly a little disappointed with the resolution. It seemed too easy and perfect but I won't dwell on that too much since the rest was brilliant. Struck is BADASS and if you want to be too…you better read this! I can't wait to see what Bosworth will write next! The ending leaves the story open to a sequel and hints at something more... *bats eyelashes* PLEEEASE?

Awesome trailer, right?!?! Who's read or will be reading this? Thoughts? :)

Struck may or may not get a sequel. It all depends on US, the READERS, so you better all run out and get this book so you can love it to death! Can't wait to buy a pretty print copy!