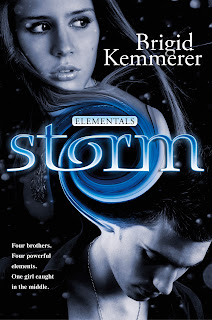 Ever since her ex-boyfriend spread those lies about her, Becca Chandler is suddenly getting all the guys—all the ones she doesn't want. Then she saves Chris Merrick from a beating in the school parking lot. Chris is different. Way different: he can control water—just like his brothers can control fire, wind, and earth. They’re powerful. Dangerous. Marked for death. And now that she knows the truth, so is Becca. Secrets are hard to keep when your life’s at stake. When Hunter, the mysterious new kid around school, turns up with a talent for being in the wrong place at the right time, Becca thinks she can trust him. But then Hunter goes head-to-head with Chris, and Becca wonders who’s hiding the most dangerous truth of all.

How do I even begin to review this amazing book? Not only do we have five (count 'em, FIVE!) male characters you will go absolutely insane for, but the story involves the exciting powers of the elements. I'm a huge sucker for these types of stories so I think I was in big trouble before I even started! Storm is filled with intense action that we begin experience at oh.. page two? After Becca gives a lacklustre performance in her self-defence class, she's horrified to hear the sounds of a vicious fight brewing in the dark parking lot. Caught between the urge to flee and help the outnumbered boy, Becca's decision will change her life forever.

Being a work of fiction, the heroine obviously races in to save her Prince Charming and what a fine choice it was! Physically, she was no match, but after giving Chris Merrick her bottle of water… Villains, watch out! Gifted with the element of water, we soon discover that his three brothers possess the others: fire, earth and air. The storyline of Storm is consuming and suspenseful, with bullies who are more dangerous than they really let on and cryptic Guides lurking in the background waiting to spring up and attack. It's an entire adventure just to uncover one secret, and the author easily strings us along in her manipulative clutches. Things that seem insignificant at first come to haunt you later on in the story (keep your eyes open for the foreshadowing!!) and suddenly everything will make sense like a big conspiracy. Kemmerer, you are the queen of twisty stories. Please continue to amaze us with your ability to keep tabs on six main characters and write consistent dual narratives.

The Merrick brothers and Hunter will easily make you revert back to your fangirly teenage selves. Each one of the characters is unique and wonderfully developed by Kemmerer, although we'll receive even deeper insight in the following sequels. Think the Perfect Chemistry series, but in roughly the same time frame, with more story variation and contribution to the overall story arc. You can look forward to a different story every time you open a book of Kemmerer's, but you'll still be very closely surrounded by all of the characters you love! Nick and Gabriel are twins, the former being a self-proclaimed hottie and the latter simply a dirty, hot, shameless Adonis flirt. *coughs* You will have no problem at all falling for their charm but you'll have to get in line.. There's a permanent one right outside their bedroom door. *points* Michael is a little harder to relate to with his abrasive personality and tendency to think the worst of people, but as we discover his devastating past (read about in the prequel, Elemental - highly recommended!), it becomes a little easier. Hugs, anyone?

The relationships Becca forms with Chris and Hunter are easily the highlight of the book. While we like to hope for wonderful romances from the get-go, Chris always did like to make things difficult! He's ungrateful and short with Becca even after she saves his life, but it's soon clear as day that the poor boy is suffering from ATTRACTION AND NERVES. So when he grows a pair and sits at her school lunch table? *faints* What a wonderful example of a well-developed relationship without the horrible insta-love. Even though there is probably more plot than romance, it's just written in a way that makes its importance undeniable. And when you throw in the mysterious new kid who's tattooed, pierced and not afraid to be badass? *picks self up from floor and faints again* After Hunter and his fierce German Shepherd, Casper, save Becca from Chris' bullies, their friendship blossoms from there and leaves Becca unexpectedly torn. Hunter is much more straightforward with his affection for her (everyone swoon at their epic kisses now!) but there's no way she can just forget about the alluring Chris. Oh I could just go on and on about why both are amazing but I fear you might slap me in the face or decide you're going to steal them for yourselves.. Not happening.

Becca was a brilliant protagonist and it was wonderful watching her "rise to power" and gaining her strength. She overcomes the slut label Drew McKay sticks on her forehead and proves to the Merrick brothers that she's after more than just a ride. She's an essential element to their survival and once again, the intriguing story is able to capture this really well. Exciting and supported by a cast of magnificent characters, Storm is the first book of what will be a favourite series of mine. If you want a book with complicated relationships between family, untrustworthy characters and shocking twists, look no further because Kemmerer has bundled it up in this beautiful blue package and slapped Chris' face on it. Grab a bib and enjoy!

So this is the gorgeous US cover, which I had the wonderful privilege of kissing holding when Brigid sent me her ARC a few months ago. Which cover do you prefer? :) 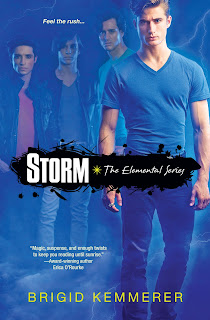