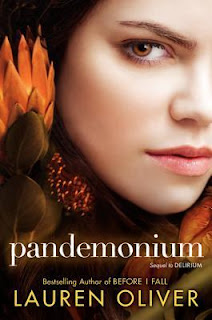 
If you thought Delirium was good, brace yourself and get ready to be blown away by a sequel filled with layer upon layer of romance, action and burning suspense. Fancy yourself a member of Team Alex? Maybe hold off on ordering those 100 t-shirts because you might find yourself reconsidering by the end of this book… Told in alternating chapters of past and present, Oliver will leave you gasping in Pandemonium, desperate to continue the story you're on but dying to get back to where you left off from before. Both stories are equally compelling and will have you hooked until the very end, but then comes the epic cliffhanger that will make you wish 2013 was here already! With gripping characters and an exciting plot, as usual, this must be another 2012 favourite for me!

Words can hardly describe how amazing this book was. While the complicated and intense relationship between Alex and Lena dominated the first, Pandemonium is a fast-paced action/adventure that will leave no one complaining of boredom. Immediately we're engaged by Lena's present life as she shows her support at a Deliria Free America rally, having been brainwashed and converted to a Cured. Every little bit of revealed information in the present will have you wondering how it all came to be, but the thrilling story of the past will only dredge up more confusing questions for you to answer. Back in time, Lena's in the Wild and living with a community of Invalids, learning their ways of life and holding onto this tiny thread of connection with Alex, who is presumably dead. Both Lenas are brilliantly strong characters, finding ways to overcome their own unique obstacles and fighting for what they believe in. It was amazing seeing them transform and grow, Oliver doing a superb job by furthering their depth with every chapter.

Don't be disappointed at all by the total lack of Alex in this book. I promise you will be so caught up in Lena's journey that you'll hardly even notice! One Julian Fineman does, however, help things along… Straight off the bat it's plain to see that the straight-laced son of the DFA's founder is secretly fascinated by the Wild, in love with the idea of freedom and something more, despite how much he preaches otherwise. Apart from a few forbidden books, this is the only way of life he's ever known…until Lena walks in and flips it upside down with her mere presence. Their chemistry and romance growth is stunning and realistic within the series, Julian changing his opinions about deliria almost painstakingly slowly. While I do still love Alex, Julian's complex character has completely won me over and I'm sure I'm not the only one who feels this way. His personal story is too compelling to resist, especially with his scheduled Cure looming just around the corner…

Even though this is a story about love and survival, the author weaves so much mystery into the novel just by telling Lena's story in two parts. Almost each chapter stops at a cliffhanger before the next changes your perception of something that happened before. There are so many shocking twists and hold-your-breath moments that you'll most likely read this in one sitting, because there isn't ever a place where things slow down and you can successfully peel yourself away without feeling as if you're losing a part of yourself! Just about everything in Pandemonium is a slow build up to a revelation, even though something exciting is happening every second page. No doubt, this is the best book of Oliver's I've ever read and I will honestly bow down and kiss the dirt if you can tell me you read this without feeling elated, sad, lusty, anxious and every other emotion at least once while reading this! Requiem will hopefully be just as stunning but after that cliffhanger? It shouldn't be a problem!

What did you think of the book? Amazing, right? :)