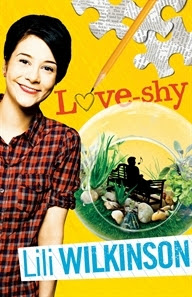 Title: Love Shy
Author: Lili Wilkinson
Publisher: Allen & Unwin Australia
Published: March 26th 2012
Source: Publisher for review
Penny Drummond aspires to be a journalist. A good one. A Pulitzer prize-winning journalist. In the meantime, she's honing her journalistic skills on the East Glendale Secondary College Gazette. When she discovers a boy at her school is posting anonymous messages on loveshy.com, Penny believes she has found just the story that will help make her name. Her mission: find him, fix him, feature-article him. Next stop: Pulitzer Prize. But what will become of her 'journey of the soul' article if the love-shy boy is not who she expects? And what happens when Penny finds that her soul might be in need of a little attention as well?

Penny Drummond has just stumbled onto a priceless gem in her very own school library, one that could make her dream of being a renowned journalist a reality. When a mystery boy flees the scene of the crime without checking out his book, Penny's curiosity draws her to his computer screen…only to find the page stuck on loveshyforum.com. According to Penny, a boy who's love shy likes classical music, citrus fruits, romantic (but not comedic) movies, has a weird relationship with his mother and is allergic to milk or wool. Could there really be one of these in her school? Okay, so maybe she's a little off base...but full points for determination and diligence! Penny will stop at nothing to figure out the nooks and crannies of this condition and may just get a few lovely shocks about herself along the way.

Throughout this humorous book, Penny chases after the confounding PEZZimist, who she discovers owns a blog in which he expresses his private thoughts. With his blog entries in mind and a yearbook in hand, she combs her entire year level in search of his true identity, conducting interviews with every single boy in a process of elimination. I enjoyed these hilarious interrogations immensely because we were immediately able to see how outgoing and straightforward she was, unafraid to ask the tough questions for the truth! *wink* The construction of her character was very well done - kudos to Lili for really exploring all angles!

I also really liked the secondary characters that were introduced. As a result of her investigations, Penny makes a whole handful of new friends, from the misogynistic Hamish to the somewhat flashy and nerdy Hugh. Although we only see them a few times, Penny's gay dad and his boyfriend are nothing short of adorable…in a strange and quirky way. (Their quest: Find the ugliest jigsaw puzzle in the world.) After Penny tracks down PEZZimist, she's tasked with the challenge of "fixing him". What she doesn't realise is that it's not so simple… Maybe it's her own life that needs a turnaround? Involved with an endless number of committees and other extra curricular activities, Penny has no time for friends and certainly not for love. Is her subconscious shielding her from what she's really afraid of? Is her busy schedule just an excuse for not being like kids her own age?

Love Shy is an entertaining comedy that's filled with unexpected friendships and deals with the growth and learning experiences of several characters. The only bone I have to pick is with the ending being too "easy" and disengaged from the nice prior build up, but I'm willing to just enjoy the development up until that point! This book touches on some sensitive issues and I loved exploring those and seeing how they were dealt with by the characters also. Funny and engaging to the very last page, this is a quick read that is thought-provoking but still manages to be light!

Do you want a little taste of Penny's "interviews"? Lili has three of them (excerpts) on her blog for you to read and enjoy <3 Oh the fun memories...