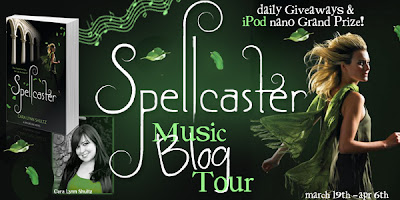 I was over the moon when I was asked to participate in the Spellcaster Tour, run by the lovely ladies at Kismet Book Tours! If you're a regular visitor of my blog, you'll know that I adore Cara nine ways to Sunday. Not only is she hilarious but 100% sweet! Check out her brilliant debut novel, Spellbound, if you haven't already. It's most definitely worth it to dig into Spellcaster!

Spellcaster by Cara Lynn Shultz
Finding your eternal soulmate - easy.
Stopping a true-love-hungry evil - not so much…
After breaking a centuries-old romantic curse, Emma Connor is (almost) glad to get back to normal problems. Although...it's not easy dealing with the jealous cliques and gossip that rule her exclusive Upper East Side prep, even for a sixteen-year-old newbie witch. Having the most-wanted boy in school as her eternal soul mate sure helps ease the pain-especially since wealthy, rocker-hot Brendan Salinger is very good at staying irresistibly close... But something dark and hungry is using Emma and Brendan's deepest fears to reveal damaging secrets and destroy their trust in each other. And Emma's crash course in über-spells may not be enough to keep them safe…or to stop an inhuman force bent on making their unsuspected power its own.

Hi Angelique! I hope the school year's treating you well so far!

Yeah, it's been a riot. I just love school…and sarcasm.

Things have been a bit crazy lately, what with Emma's mysterious stalker... How's it feel knowing she relies so heavily on your guidance for all things witch?

As much as I welcome the opportunity to present myself as some all-knowing witch, I'm not one. I have to call in reinforcements—infrequently, but it happens from time to time. But honestly, I don't think of it like she's relying on me in a student/teacher role, although our "witch classes" as she calls them, may inadvertently reflect that kind of relationship. Basically, Emma's my friend and she's pretty cool. And it's really…refreshing…to have someone I can share all this knowledge with. It's nice having someone that isn't a relative to practice witchcraft with. I think of it like we're learning together.

Like you, your mother's a witch so you've grown up in this world. In all of your time, what's the coolest thing you've seen or been able to do?

I think the very first time I conjured fire was the coolest thing I've done, just because it was the first spell I successfully completed on my own. Granted, it was a spell from my cousin's Randi's grimoire, but I managed to make my bed appear to be on fire.

If you were to be stranded on a deserted island, which one item would you want to have with you and why? A spell book? Charm? Voodoo doll? *grins and whispers* We won't say who that'll be for……

Ha! As much as I'd love to rip the head off a Voodoo doll devoted to a certain person, I wouldn't want to waste my item on someone so undeserving of my attention. So on a deserted island, I'd bring a boat. Or a cell phone.

And finally, you and Brendan aren't the best of friends! (Understatement?) What do you think about his relationship with your best friend?

Honestly, Brendan was easier to hate when I didn't really know that much about him. It's a lot easier to dismiss an aloof, untouchable player than it is to hate the devoted boyfriend of your best friend. It's just been really hard for me to reconcile that those two are the same person. I wrote Brendan off because he stood for everything I find distasteful. But he's not the person I thought he was, which makes me wrong about him. And I hate being wrong. Ugh, he's still a pain in the ass, though.

It's been lovely chatting with you, Ange! *bows* Thanks for dropping by and regaling us with your wisdom ;)

No problem, I like you guys. It was fun.

My favorite song right now—"Malleus Maleficarum" by A.F.I. To be honest, this song has become something of my theme song. I find strength in it. Whenever some…peon…mocks me for my beliefs or calls me "freak," I just smile and listen to this song, because their taunts only make me a stronger person. I also heard that it was about witches being burned at the stake, so bonus points right there for this song.

Giveaways - Open US/Canada (Full Contest Rules)
Lookie here! An iPod with a beautiful Spellcaster skin. Want the chance to win this gorgeous grand prize? At the end of the tour, a Rafflecopter form will become available where you'll have to answer a question about one character. If you follow all of the posts you should be able to answer it easily!

Be sure to check out the daily giveaways available throughout this tour too! Fill in the Rafflecopter form below to score yourself a copy of Spellcaster.


A final thank you to Kismet and Cara for getting me on board with this! Love you all :) Readers, grab this series ASAP and fall in love with Brendan Salinger.... (Proof of Awesomeness: IM Chat)
Posted by Lisa at 4:00 PM