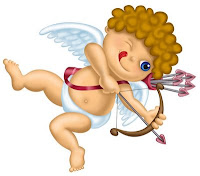 Cupid's been a little overzealous with his arrows lately and the poor girls of YA have had to pay the price. It's one thing to fall for the dark and handsome stranger in town, but when Cupid shoots at his arch rival and the girl can't get either of the guys out of her head? Yeah, things get a little... complicated. So we've recruited the leading experts in the field of Love Triangles to help settle the debate once and for all.

The problem? Some crazy girls actually want the other guy to win the girl! They're the Puck to your Ash. The Jem to your Will. They each put up a compelling argument and - we admit - make our hearts beat like crazy for both guys! But there can only be one champion. Only one guy can win the heart of our leading lady and we need YOU to help decide.

PRIZE PACKS FOR VOTERS
(Yes, if you wrote the posts, you can still be entered to win this prize pack by voting!)

PRIZE PACKS FOR WRITERS
We already know who you amazingly talented people are, so no need to fill out any forms. You will automatically be entered!

Be sure to keep checking back as debates are posted and vote vote vote! We’ll be adding links to this schedule as they go up! Don’t let your Team lose!! At the end of the month, we’ll reveal which guys you voted the champion in each love triangle!

Show your love and support for your Team in the comments!
We encourage friendly rivalry, but when you start tearing off the opposing fangirls’ heads, we may have to call in reinforcements (probably hot guy reinforcements. Our security team must look the part).
Posted by Lisa at 6:00 PM