I've recently become a fan of mermaids. Not the pretty Little Mermaid kind but...anyway.  A timeless curse and starcrossed romance? *grabs* I want! Monstrous Beauty will be released in September but let's hope we can get some ARCs out, huh? ;)

Elizabeth's joined me today to speak briefly about the characters in her book. Do they look good? Which one are you most excited to meet? I think there'll be some great mythology in this one...

The image below is of a picture Elizabeth's daughter painted of Syrenka, the mermaid. Isn't she talented?! Apart from that, the cover is gorgeous too. So much pretty in one place... 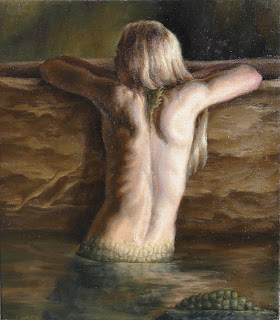 There are two love stories in the book, so it was difficult to choose one:
HE
He's a naturalist and a born intellectual. We see snatches of him when he's a boy, playing in tide pools and sketching sea life. He's the son of a ship-builder, but he has little interest in boats or business. As a young man he's brilliant, and passionate about his research. He will only be attracted to a woman who's intelligent, quick-witted, and unaffected, despite the town girls who see that he's handsome and wealthy and throw themselves at him. When he finds the right woman, a life partner he knows is his equal, he'll fall hard.
SHE
She's a monster--not grotesque, but a "threatening force." The Old French root of "monster" is "portent, or sign," and everything about her is ominous. In her childhood she was wounded, abused, and anxious for escape. She's bright, wild, impulsive, and insatiably curious. She's a fierce lover, and loyal to a fault. His gentle acceptance and active mind will be everything she needs.
THEY
He's the person who loves her for exactly who she is. She's the person who will defend him to the death. If only the world would let them be.

So is this book on your TBR? I sure hope so! Lisa T. Bergren's sharing an intense excerpt from her novella, Bourne, on Brodie's blog so be sure to check that out! I really can't wait to read her River of Time series :)

*gasp* Only one more day of this event to go! Minus the giveaway announcements, goodbyes and all... But STILL, this month has flown by. Thanks for sticking with us! Check out anything you've missed here.
Posted by Lisa at 7:00 PM