Dimitri and Adrian... Maybe as big a debate as Edward vs. Jacob? This is one of those times where you just don't know what to do. On one hand, Dimitri's the protective warrior who will protect Rose until he dies. On the other, Adrian gets Rose and well, they make an explosive pair. #TORN

Once you can peel your eyes away from the gorgeous picture of Taylor Kitsch Dimitri, read the arguments for the Vampire Academy boys and vote in the poll at the bottom! Vote and defend in the comments to earn entries for the giveaway.

Miss the previous 12 debates that were posted? Check out the full debate list, with links! Simon and Derek from The Darkest Powers are currently showing each other who's boss on Brodie's blog!

Dimitri Belikov is an exceptionally handsome 6'7" tall Russian with a lean, muscular physique who's angular, masculine features frame chocolate brown eyes. His shoulder-length brown hair compliments his tanned skin, and his trademark duster makes him mysteriously alluring. And if you're wondering, yes, he has big feet ;) He loves a good old western novel, he's intense, noble, passionate and brave. He's also incredibly romantic, compassionate, and chivalrous - once he lets you in. He's Rose's perfect other half - possessing the qualities Rose most wants to embody, but in need of someone like Rose to teach him how to have a little fun.

His reputation heightens him to "god-like" status due to his fierce fighting abilities, the passion with which he protects those assigned to him, and his ability to always puts his duty as a guardian before his personal desires. He values honour, duty and nobility above all else - except for when it comes to Rose. He's willing to give up everything he believes in to keep her from harm, since underneath his god-like, tough exterior is a man hopelessly in love.

At first, Dimitri feels he has to hide his true feelings for Rose, in order to best uphold his guardian duty.

"Why did you lie?" I murmured again.
Still holding me in his arms, he looked down at me. I could hear voices and footsteps getting closer.
"Because we can't be together."
"Because of the age thing, right?" I asked. "Because you're my mentor?"
His fingertip gently wiped away a tear that had escaped down my cheek. "That's part of it," he said. "But also... well, you and I will both be Lissa's gaurdians someday. I need to protect her at all cost. If a pack of Strogoi come, I need to throw my body between them and her."
I know that. Of course that's what you have to do." The black sparkles were dancing in front of my eyes again. I was fading out.
"No. If I let myself love you, I won't throw myself in front of her. I'll throw myself in front of you."


But his intense feelings for Rose, whom he affectionately refers to as Roza, eventually turns his whole world upside down. He soon finds himself unable to stop from touching her hair (which he adores), lingering too long and too close and stealing glances when no one else is looking. Her stubbornness and inability to think before acting has him acting out of character and embracing his slightly less responsible side.


"No," Dimitri interrupted gently. He moved his face toward mine, our foreheads nearly touching. "It won't happen to you. You're too strong. You'll fight it, just like you did this time."
"I only did because you were here." He wrapped his arms around me, and I buried my face in his chest. "I can't do it by myself," I whispered.
"You can," he said. There was a tremulous note in his voice. "You're strong—you're so, so strong. It's why I love you."


Even his time spent as a Strigoi was unable to hamper his love for Rose.


The value of his character truly shone when he found out Rose was with Adrian. Even though it pained him to see Rose with another man, the value he places in honour and integrity had him completely unwilling to disrespect Adrian by stealing his girlfriend.


Frustration filled his features. "Rose I've done a lot of bad things, most of which I can never fix or find redemption for. My only choice now, if I want to reclaim my life, is to go forward, stopping evil and doing what's right. And what is NOT right is taking a woman from another man, a man I like and respect. I'll steal cars. I'll break into houses. But there are lines I WILL not cross, no matter what...”


But the reason Dimitri is most perfect for Rose is because of how well he knows her - and how well Rose knows him in return.


And it was that attitude that had made me love him so much. I had a similar nature. I too rushed in when others needed me, sometimes when I shouldn't have. Others called me crazy for it, but Dimitri had understood. He'd always understood me, and part of what we'd worked on was how to temper that impulsive need to run into danger with reason and calculation. I had a feeling no one else in this world would ever understand me like he did.


Still not convinced? Listen to Richelle Mead talk about Dimitri and Rose, and why they so perfectly compliment each other!

TEAM ADRIAN
Represented by: Ajoop from On Books!


“Takes a lot of tries before you hit perfection." he paused to reconsider that. "Well, except for my parents. They got it on the first try." (Adrian)” Bloodlines


Ladies and gentlemen, allow me to introduce you to Adrian Ivashkov from the Vampire Academy series who is HOTNESS personified! Yes, he has a reputation as a wealthy, indulgent and arrogant Moroi royal… but nobody bought that even for a minute! Especially Rose Hathaway, who met Adrian when she went to the porch of the ski lodge, her head already full of Dimitri and Mason. This happens in Frostbite and the entrance of Adrian into her (and our) life could not be more phenomenal! He greets her with a, “Hey little dhampir.” And I’m sure Adrian had Rose at, “Hey little dhampir”! 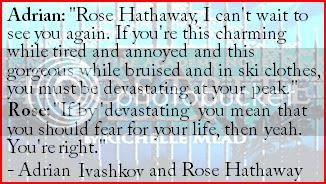 Adrian is a shameless flirt. He’s forthright without being a jackass. Even at their first encounter, he actually managed to pull off being sexy and adorable at the same time. Of course, he has his own issues… and masks it with clove cigarettes and bad behaviour.  Adrian spoke to Rose for a purpose that becomes clear later on. But he isn’t annoyingly angsty. He holds his own ground, is fun and completely straight forward.

Adrian’s vulnerability and devotion for Rose is so sweet, it is heartbreaking. Did the amazing favourite-and-only-grandson-of-Queen-Tatiana have to be the one that got away?

I mean, take when Rose had to go to Russia to hunt for Dimitri. She couldn’t have made it if Adrian hadn’t lent her money at her request. And he gave her the money, no questions asked. He just needed to check on her and asked for a chance to reevaluate their relationship. My heart melted and went out to Adrian! Why isn’t the dude real? Seriously! 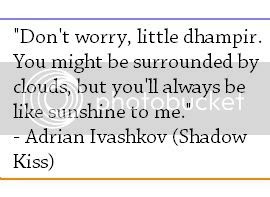 It’s amazing how frank Adrian is about his feelings towards Rose. There’s no “I’m too dangerous” or “Get away from me if you know what’s good for you.” Just unquestionable devotion and a lot that could be more! With Adrian, it is like with Rose he has finally met his match! Rose is feisty and impulsive while Adrian is a bit cocky and presumptuous. But here’s what’s beautiful… add Rose to Adrian’s equation and you get earnest, respectful and TOTALLY sweet Adrian!! Even Rose has a less on her mind and has a lot more fun with him.

Dimitri is perfect and everything. But with Rose and Dimitri, we had to go through episodes of We will never belong and I’m too dangerous! It was so frustrating, especially towards the end of Spirit Bound. Obviously, Dimitri went through a lot. But it’s simple with Adrian! It could be complicated… as I said, they both have issues. But it’s not! Adrian is smart, sexy and knows what he wants. He can visit my dreams anytime he wants! 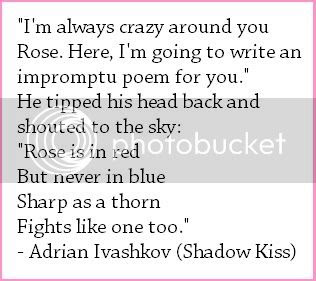 Now, weren't those two debates great? I'm just as undecided as before!! Both girls brought up brilliant points and..I think I'll just go and sit in the corner. The boys can battle it out themselves because I'm not getting involved =|


After you check out Derek vs. Simon on Brodie's blog, then come back in a few hours for the final two debates! We've got the boys from Firelight and Soul Screamers coming in ;)
Posted by Lisa at 2:00 PM