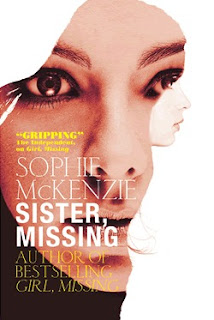 It's two years after the events of Girl, Missing and life is not getting any easier for sixteen-year-old Lauren, as exam pressure and a recent family tragedy take their toll. Lauren's birth mother takes Lauren and her two sisters on holiday in the hope that some time together will help, but a few days into the holiday one of the sisters disappears, under circumstances very similar to those in which Lauren was taken years before. Can Lauren save her sister, and stop the nightmare happening all over again?

It isn't a secret that I didn't enjoy Girl, Missing as much as I would've liked but this book kicks things up a notch and is much more enjoyable! While I still wasn't head-over-heels in love with the characters, I found myself becoming engaged in the large amounts of action and complex mysteries. Years after the release of the first book, Sister, Missing is a great improvement to the series.

Lauren's real father passed away 9 months ago and now at sixteen, she's had time to grow up and be more mature than she was at fourteen. I wasn't pleased to see hints of her selfishness peek out again and hinder her progress but luckily it was much more bearable this time around! We have the good plot to thank for that. I enjoyed the story immensely! Lauren's younger sister, Madison, is kidnapped on the beach and all signs point to Sonia, the woman who kidnapped Lauren in a very similar fashion when she was a little girl. I loved the negotiations, tasks, threats and mysterious phone calls that came with this storyline, plus the twists that occurred throughout the book! There was never a dull moment.

The characters were developed more in this sequel, which gave it more depth than the first. Shelby, Lauren's sister, is a character to be hated. She does an endless list of horrible things but you might eventually forgive her at the end... Might. I was surprised with the conclusion, but thought it was fitting for the series. There will be a third book, six years in the future, so I guess that's why things are left relatively open-ended.

All in all, a fast-paced read that'll entertain with its action and suspense. Sister, Missing was much better than its predecessor and I'm glad I continued on to leave with a better impression of McKenzie's writing. On that note, I'll be keeping an eye out for her soon-to-be-released, Falling Fast! Sounds like a nice contemporary romance I'd enjoy.