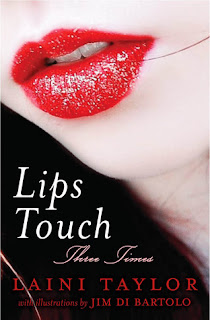 Everyone dreams of getting the kiss of a lifetime... but what if that kiss carried some unexpected consequences? A girl whos always been in the shadows finds herself pursued by the unbelievably attractive new boy at school, who may or may not be the death of her. Another girl grows up mute because of a curse placed on her by a vindictive spirit, and later must decide whether to utter her first words to the boy she loves and risk killing everyone who hears her if the curse is real. And a third girl discovers that the real reason for her transient life with her mother has to do with belonging -- literally belonging -- to anther world entirely, full of dreaded creatures who can transform into animals, and whose queen keeps little girls as personal pets until they grow to child-bearing age.

In this wonderful book, you'll find a collection of three stories about the consequences of just one kiss. Will it be the beginning of forever? Or the end? Laini Taylor explores the idea of humans weakened by love, as they're thrown into and unfairly battered by situations completely out of their control. Complemented by her husband's hauntingly beautiful pictures, Lips Touch will capture you with its sultry darkness, edginess and addictive mythology. It's unlike anything I've ever read before - I award full allure points!

The first story, "Goblin Fruit", deals with a girl who's nothing like the others in town. Unkissed and wishful, she's the perfect prey for goblins. When the gorgeous Jack Husk transfers to her school and lets Kizzy corrupt his "virgin lungs" with her cigarettes, the two form a sweet relationship that will charm you before it becomes obvious Kizzy would do anything to have true love. Will she really jump and take the plunge? Will you find yourself approving of her decisions? Not only will you love these two but Kizzy's friends, who are hilarious. They set a humorous tone for the book before it gets increasingly dark and intense. I loved this short story and could've read books more!

Things take a turn for the worse as we're met with a deal-making woman who's forced by a demon to curse a baby. As a consequence, Anamique has been a mute since birth, warned that her beautiful voice would kill anyone within hearing distance. "Spicy Little Curses Such As These" begins with an ominous foreshadowing, something you won't understand yet but will uncover slowly as you read. This story is probably my favourite of the three and I would love to expand on the brilliant concept! With realistic characters, a breathtaking plot and a romance that'll make you clutch your heart, prepare to meet the gentlemanly James and for the shocking but perfect ending.

"Hatchling" is the longest story, with the most development and unique mythology. Taylor really showcases her originality and imagination here, ending the book with a bang! Kept as the Druj Queen's pet as a child, Mab must now deal with the obstacles her daughter will face. As Esme begins displaying signs of being a Druj, what we come to learn as the truth is much more horrifying. If by this point she hasn't already, Taylor will wow you with the depth and complication of this story. I adored the twists and different levels of relationships, and once again thought the ending was spot on. Can you say heart-clenching?

Lips Touch definitely has darker themes and a more mature tone than other YA books, so don't be too shocked when something unimaginable happens! I'm usually not a fan of short stories but Taylor manages to develop her characters and sell her story in the short length! You'll fall in love with her poetic writing immediately and be asking for more. While lacking that 5 star spark for me, I still thoroughly enjoyed my first taste of her work!

I've yet to read Daughter of Smoke and Bone... I know, I'm horrible.... What did you think?