Many people are passionate fans of Maria V. Snyder. If you're not one of them, you better run out to grab her books ASAP because you're clearly missing out! Or...you could just enter this giveaway for your first little sample. You'll be scrambling to get your hands on more!
Today I'm lucky enough to be giving away two copies of her latest book, Touch of Power. If you need any more affirmation that this is a must-read book, check out my review! Still need more? Brodie has a brilliant character interview with the main characters, Avry and Kerrick, so devour away! Touch of Power aside, check out this deleted scene from Magic Study for more Maria goodness. 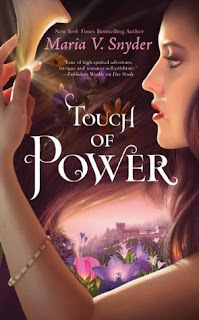 Laying hands upon the injured and dying, Avry of Kazan assumes their wounds and diseases into herself. But rather than being honored for her skills, she is hunted. Healers like Avry are accused of spreading the plague that has decimated the Territories, leaving the survivors in a state of chaos. Stressed and tired from hiding, Avry is abducted by a band of rogues who, shockingly, value her gift above the golden bounty offered for her capture. Their leader, an enigmatic captor-protector with powers of his own, is unequivocal in his demands: Avry must heal a plague-stricken prince—leader of a campaign against her people. As they traverse the daunting Nine Mountains, beset by mercenaries and magical dangers, Avry must decide who is worth healing and what is worth dying for. Because the price of peace may well be her life....

This giveaway is for AUSTRALIAN AND NEW ZEALAND RESIDENTS ONLY. It ends on February 25th and extra entries are available in the form below!
The prizes have been donated by the beautiful Gabby from HarlequinTEEN Australia so send her much love and thanks!
CLICK HERE TO ENTER
Posted by Lisa at 7:00 AM