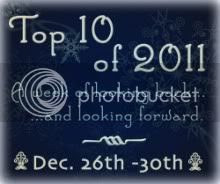 Above by Leah Bobet
Matthew has loved Ariel from the moment he found her in the tunnels, her bee's wings falling away. They live in Safe, an underground refuge for those fleeing the city Above--like Whisper, who speaks to ghosts, and Jack Flash, who can shoot lightning from his fingers. But one terrifying night, an old enemy invades Safe with an army of shadows, and only Matthew, Ariel, and a few friends escape Above. As Matthew unravels the mystery of Safe's history and the shadows' attack, he realizes he must find a way to remake his home--not just for himself, but for Ariel, who needs him more than ever before.

Matthew sounds like an absolute darling and I love reading romances where the relationships already exist! Bees wings, hey? This sounds magical! <3

Spellcaster by Cara Lynn Shultz
Finding your eternal soulmate - easy. Stopping a true-love-hungry evil - not so much… After breaking a centuries-old romantic curse, Emma Connor is (almost) glad to get back to normal problems. Although...it's not easy dealing with the jealous cliques and gossip that rule her exclusive Upper East Side prep, even for a sixteen-year-old newbie witch. Having the most-wanted boy in school as her eternal soul mate sure helps ease the pain-especially since wealthy, rocker-hot Brendan Salinger is very good at staying irresistibly close.... But something dark and hungry is using Emma and Brendan's deepest fears to reveal damaging secrets and destroy their trust in each other. And Emma's crash course in über-spells may not be enough to keep them safe…or to stop an inhuman force bent on making their unsuspected power its own.

I fell in love with Spellbound - really really hard. Brendan is so loveable and has such great chemistry with his soulmate, Emma. I can't wait to get back into the series again! When I finished Spellbound, I was devastated because it was a stand-alone at the time! Thanking all higher powers for letting Cara write more. 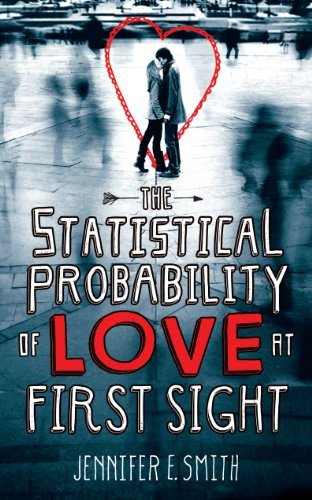 The Statistical Probability of Love at First Sight by Jennifer E. Smith
Today should be one of the worst days of seventeen-year-old Hadley Sullivan's life. She's stuck at JFK, late to her father's second wedding, which is taking place in London and involves a soon to be step-mother that Hadley's never even met. Then she meets the perfect boy in the airport's cramped waiting area. His name is Oliver, he's British, and he's in seat 18C. Hadley's in 18A. Twists of fate and quirks of timing play out in this thoughtful novel about family connections, second chances and first loves. Set over a 24-hour-period, Hadley and Oliver's story will make you believe that true love finds you when you're least expecting it.
This sounds like such a fabulous story - soulmates meeting on a plane? *heart flutters* I hope they kick the person out of 18B, or perhaps it's already empty? Go fate! Heard such good things about this. I'm ready for an epic romance, guys!

Insurgent by Veronica Roth
One choice can transform you—or it can destroy you. But every choice has consequences, and as unrest surges in the factions all around her, Tris Prior must continue trying to save those she loves—and herself—while grappling with haunting questions of grief and forgiveness, identity and loyalty, politics and love. Tris's initiation day should have been marked by celebration and victory with her chosen faction; instead, the day ended with unspeakable horrors. War now looms as conflict between the factions and their ideologies grows. And in times of war, sides must be chosen, secrets will emerge, and choices will become even more irrevocable—and even more powerful. Transformed by her own decisions but also by haunting grief and guilt, radical new discoveries, and shifting relationships, Tris must fully embrace her Divergence, even if she does not know what she may lose by doing so.
I'm actually really scared to read this LOL. Divergent was so good that I'm worried Insurgent won't live up to expectations. Will it be as heart-racing as the first book? Fingers crossed!

Storm by Brigid Kemmerer
Ever since her ex-boyfriend spread those lies about her, Becca Chandler is suddenly getting all the guys—all the ones she doesn’t want. Then she saves Chris Merrick from a beating in the school parking lot. Chris is different. Way different: he can control water—just like his brothers can control fire, wind, and earth. They’re powerful. Dangerous. Marked for death. And now that she knows the truth, so is Becca. Secrets are hard to keep when your life’s at stake. When Hunter, the mysterious new kid around school, turns up with a talent for being in the wrong place at the right time, Becca thinks she can trust him. But then Hunter goes head-to-head with Chris, and Becca wonders who’s hiding the most dangerous truth of all.
Are you kidding me? Four hot brothers with badass abilities? I'm so there! Love the mystery/action element of the book too! Hunter sounds like a little trouble maker....

The Selection by Keira Cass
For thirty-five girls, the Selection is the chance of a lifetime. The opportunity to escape the life laid out for them since birth. To be swept up in a world of glittering gowns and priceless jewels. To live in the palace and compete for the heart of the gorgeous Prince Maxon. But for America Singer, being Selected is a nightmare. It means turning her back on her secret love with Aspen, who is a caste below her. Leaving her home to enter a fierce competition for a crown she doesn't want. Living in a palace that is constantly threatened by violent rebel attacks. Then America meets Prince Maxon. Gradually, she starts to question all the plans she's made for herself- and realizes that the life she's always dreamed of may not compare to a future she never imagined.
A bunch of girls vying for the attention of a Prince? Love it! I can't wait to see how America's feelings for Aspen and Maxon change! Looking forward to seeing some fun competition... *grins* 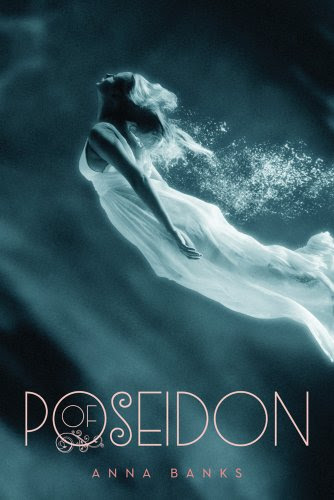 Of Poseidon by Anna Banks
Emma and her friend Chloe are spending vacation in Florida. When Emma (literally) runs into a hot guy named Galen on the beach, little does she know he’s a prince of the Syrena. Galen and Emma both feel something strange – is it attraction? – and Galen suspects that Emma might well be the girl he’s heard of – a human who can communicate with fish. What follows is a deadly scene with a shark in which Galen witnesses Emma’s gifts. He must know more about her, and follows her back to New Jersey, and high school, to find out for sure if she’s the key to saving his kingdom. Soon, Emma can’t deny her feelings for him, but can’t explain them, either – and both she and Galen must learn more about where she comes from and what her powers are before they can trust one another and their feelings.

Hot Prince Galen plus a human with special gifts? Ah! So excited. Hopefully she IS the key to saving his kingdom and hopefully she doesn't have to make some horrible sacrifice for it to happen <3

The Fine Art of Truth and Dare by Melissa Jensen
Ella is nearly invisible at the Willing School, and that's just fine by her. She's got her friends - the fabulous Frankie and their sweet cohort Sadie. She's got her art - and her idol, the unappreciated 19th-century painter Edward Willing. Still, it's hard being a nobody and having a crush on the biggest somebody in the school: Alex Bainbridge. Especially when he is your French tutor, and lessons have started becoming, well, certainly more interesting than French ever has been before. But can the invisible girl actually end up with a happily ever after with the golden boy, when no one even knows they're dating? And is Ella going to dare to be that girl?

*coughs* Hot, popular French tutor? ..where can I get myself one? Sounds like this book will be filled with witty humour, reluctant romance and sweet lovin' ;) Itching to meet Alex!

Until I Die by Amy Plum
Kate and Vincent have overcome the odds and at last they are together in Paris, the city of lights and love. As their romance deepens there’s one question they can’t ignore: How are they supposed to be together if Vincent can’t resist sacrificing himself to save others? Although Vincent promises that he’ll do whatever it takes to lead a normal life with Kate, will that mean letting innocent people die? When a new and surprising enemy reveals itself, Kate realizes that even more may be at stake—and that Vincent’s immortality is in jeopardy.
I really enjoyed Die For Me - the characters were wonderful! Not even just Kate and Vincent but Vincent's other revenant buddies ;) I'm ready for more Jules! Sounds like things will be getting tough though. Losing your immortality when you're constantly "killing yourself" for others? Uh oh. 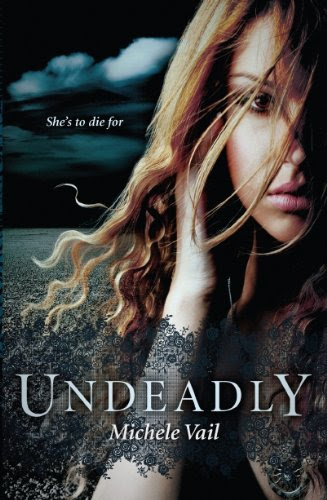 Undeadly by Michele Vail
Molly Bartolucci wants to blend in, date hottie Rick and keep her zombie-raising abilities on the down-low. Then the god Anubis chooses her to become a reaper—and she accidentally undoes the work of another reaper, Rath. Within days, she’s shipped off to the Nekyia Academy, an elite school that trains the best necromancers in the world. And her personal reaping tutor? Rath. Who seems to hate her guts. Rath will be watching closely to be sure she completes her first assignment-reaping Rick, the boy who should have died. The boy she still wants to be with. To make matters worse, students at the academy start turning up catatonic, and accusations fly—against Molly. The only way out of this mess? To go through hell. Literally.

I think we have a winner on our hands! Molly sounds badass - like another Rose Hathaway. Zombies? Reapers? Academies? <3 Looks like Rath, Molly and Rick have one huuuge mess waiting for them! So excited to read this!

Ten is too less! *wails*
So many amazing sequels and debuts are coming out in 2012! There are so many more that I would've loved to include in this list but...I'd rather not wear out my brain just yet ;)

Are you excited for these fabulous new books too? Leave me your links!

Also, some people are adding their reading stats to their posts today!
Well......this year I've posted up 129 reviews on the blog and have read over 140 books. I only began blogging in March and, even then, didn't begin seriously reading a lot until a few months after that. So I'd say it's been a pretty good year!
I'd love to say that I'm going to read 365 books in 2012 and it would be completely possible if next year wasn't going to be my most busiest ever! How did your 2011 reading go?
Posted by Lisa at 8:32 PM