Review: Under the Never Sky 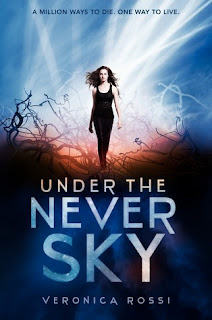 Since she’d been on the outside, she’d survived an Aether storm, she’d had a knife held to her throat, and she’d seen men murdered. This was worse. Exiled from her home, the enclosed city of Reverie, Aria knows her chances of surviving in the outer wasteland—known as The Death Shop—are slim. If the cannibals don’t get her, the violent, electrified energy storms will. She’s been taught that the very air she breathes can kill her. Then Aria meets an Outsider named Perry. He’s wild—a savage—and her only hope of staying alive. A hunter for his tribe in a merciless landscape, Perry views Aria as sheltered and fragile—everything he would expect from a Dweller. But he needs Aria’s help too; she alone holds the key to his redemption. Opposites in nearly every way, Aria and Perry must accept each other to survive. Their unlikely alliance forges a bond that will determine the fate of all who live under the never sky.
Current favourites of 2011, move over and make room for Under the Never Sky. With tantalising characters and finely detailed world-building, there is absolutely no way you can resist this spellbinding read.

After being thrown out of Reverie for a crime she didn't commit, Aria finds herself in the middle of a dangerous Aether storm on the outside. At the same time, Perry leaves the Tides to search for his nephew, who he believes was kidnapped by Dwellers in retaliation to his recent trespassing into Reverie on the very same night he saved Aria from a fiery death. Watch how two people from entirely different worlds come together to form the most unexpected relationship. With such a compelling and suspense-filled plot, Rossi captures us in her addictive writing immediately and doesn't let go even after we've turned the final page. I fell in love with the strength and danger this story presented, and can't wait to read more!

Rossi has created a fascinating world I'm in total awe of. Reverie is a city enclosed in domes where Dwellers use Smarteyes to access the Realms, which are virtual spaces where you can be anyone, anywhere, doing anything. They have no chance of getting hurt, with Dwellers usually living past a hundred with their age-defying technology. On the outside, the Savages use traditional methods of hunting and shelter to survive, trained to withstand the atmosphere, Aether storms, deadly predators and more. While some background and minor elements of the world aren't entirely explained yet, the information provided is more than enough for us to envision it in our minds. I'm sure we'll get more of it in the sequel as Rossi continues to build up the layers!

With the already stunning world and plot, can you believe that there are stand-out characters too? From the moment Aria and Perry were introduced, I couldn't take my eyes off them, nor could I stop worrying about their wellbeing. Our heartstrings are tugged as the two struggle with outside evils, as well as their internal warring about one another. When they first meet, Aria is terrified of Perry because he is a Savage, while he thinks she's nothing but a weak Dweller. Along their journey, they run into Perry's best friend, Roar, a charming flirt who's very aware of the tension between the two. All three have their fair share of funny, heartbreaking, hot and sweet scenes, and will make you want to scream from the rooftops. When Perry and Aria's barriers come down, get ready for one of the best romances you'll ever read. Their relationship develops so realistically and you can see with your very own eyes how prejudiced hate turns into love.

Get tangled in this beautifully written action/adventure novel, tied together with a powerful romance you can't deny. Be warned, you may feel light-headed upon reading this so be sure you're seated...unless you're jumping up to cheer and shout...or running around the house shrieking. With final scenes that'll leave you gasping, Under the Never Sky will have you counting down to the sequel!

I'm still in FULL FANGIRL MODE. Somebody pinch me. Or join the squeal fest if you've read this too LOL. Perry, you badass sweetheart! <3
Find Veronica on Twitter, Goodreads, Facebook and her blog.
Buy Under the Never Sky from Amazon, The Book Depository and Barnes & Noble.
Posted by Lisa at 6:37 PM