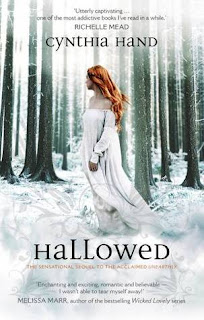 For months part-angel Clara Gardner trained to face the raging forest fire from her visions and rescue the alluring and mysterious Christian Prescott from the blaze. But nothing could prepare her for the fateful decisions she would be forced to make that day, or the startling revelation that her purpose—the task she was put on earth to accomplish—is not as straightforward as she thought. Now, torn between her increasingly complicated feelings for Christian and her love for her boyfriend, Tucker, Clara struggles to make sense of what she was supposed to do the day of the fire. And, as she is drawn further into the world of part angels and the growing conflict between White Wings and Black Wings, Clara learns of the terrifying new reality that she must face: Someone close to her will die in a matter of months. With her future uncertain, the only thing Clara knows for sure is that the fire was just the beginning.
Recovering from the fire that had her choosing between the boy she was supposed to save and the boy she couldn't let die, Clara begins to discover that many things aren't as they seem. While she's plagued with visions of a death, Clara's world is turned upside down when the people around her reveal their shocking secrets. She learns about her true background, what exactly is going on with the two men in her life, what her secretive brother has been hiding and things about the angel world she would've never thought. Enjoy the ride as we once again fall into this mesmerising world of love and angels created by the talented Cynthia Hand.

After the exceptional book that was Unearthly, I was a little worried that Hallowed wouldn't live up to expectations. Fret no more because this sequel goes above and beyond to sate our thirst for more! I loved all of the characters in the first book so I was delighted to find that they were all developed so well! Burning questions we had about them are answered (especially those relating to her parents!) and the unveiling of many secrets are startling as they change the way we perceive everything. We've been in the dark for so long and we're finally getting some answers! I could go into more detail but discovering these things are half the fun ;) I have to bow down to Hand for the way she handles these big reveals. Rather than being sudden and out of the blue, we realise that clues have been left and foundations have been set up from the very beginning. Everything feels right and like they should just be, no matter how surprising or devastating.

The love triangle gets even stronger, can you believe? After a few particular secrets are revealed, Clara and Christian find that they have many things in common. It's like the heavens are pushing them to be together! *crickets chirp* Yes, it's true. I enjoyed seeing Clara's internal struggle so much. She's devoted to her loving boyfriend, Tucker, but all forces seem to be directing her towards Christian. From their visions and angel similarities to their telepathic link, you'll begin to wonder if the two are destined for each other after all. Both love interests have their moments during this book. With playful flirting, serious talks and hot encounters from both sides…it's an interesting read, let me tell you! All of that tension will explode one day! If you were strictly on a Team in the first book, you'll find that Hand slowly but surely develops them both into solid love interests with equally irresistible traits. Take that and make your way to The Fence!

I am very excited to read the third book of this series. After the discoveries I can't stop mentioning, many pathways will appear. This story can go in any direction and I can't wait to see where the author takes it! She puts a terrific spin on angel mythology while creating a stunning world of vulnerability, danger and inner-strength. With a cliffhanger that'll leave you screaming, get buckled in for a novel filled with mystery and addictive romance! Is it 2013 yet...? *spirals into a depression*