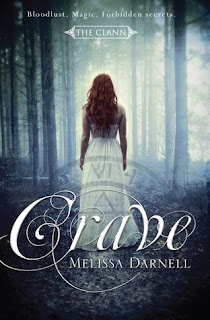 Savannah Colbert has never known why she's so hated by the kids of the Clann. Nor can she deny her instinct to get close to Clann golden boy Tristan Coleman. Especially when she recovers from a strange illness and the attraction becomes nearly irresistible. It's as if he's a magnet, pulling her gaze, her thoughts, even her dreams. Her family has warned her to have nothing to do with him, or any members of the Clann. But when Tristan is suddenly everywhere she goes, Savannah fears she's destined to fail. For years, Tristan has been forbidden to even speak to Savannah Colbert. Then Savannah disappears from school for a week and comes back…different, and suddenly he can't stay away. Boys seem intoxicated just from looking at her. His own family becomes stricter than ever. And Tristan has to fight his own urge to protect her, to be near her no matter the consequences….
With the beautiful Australian cover, I was so excited to get my hands on this book. A forbidden love of the magical kind? Count me in! While I did like the concept of the novel, I found that it was let down by some poor planning and execution of character development. Nevertheless, Crave does have its enjoyable moments and has the potential to be a great read for the right person.

Tristan Coleman was Savannah Colbert's first kiss, boyfriend and love at the age of nine. They were inseparable best friends until one day, after their pretend wedding, Tristan and all of the other Clann members avoided her like she was the plague. Until now, Sav has been in the dark about what happened and the secrets that are unveiled about herself and family will change her life forever. I won't spoil the plot by telling you the secret, but I loved it. Crave has the tools to be an amazing romance, but Darnell sadly doesn't utilise them fully. Firstly, the fantastic paranormal element of the novel is often disrupted by "growing up" moments that are unnecessary and slow down the book. After I finished reading, I was still left not knowing much about the characters or having any real connection with them.

Speaking of the characters, I must say that Savannah got on my nerves. She's unfairly dealing with the consequences of her family's past actions but the young girl has no sense of responsibility and doesn't understand the meaning of sacrifice. Throughout the book, she has an immature outlook on life and acts recklessly. Even with magical influence, stalkers and death threats hanging over her head, she still chooses to make the wrong decisions and provoke the enemy. Her actions affect everyone but she doesn't realise or care! I found myself screaming "SELFISH!" too many times and was disappointed that she wasn't the strong heroine I was expecting. Crave is filled with sometimes predictable mysteries but I think a lot of it depended on Savannah's ignorance of what was happening around her. Put the pieces together, girl! Crave will satisfy a younger audience, in my opinion, as an older one will get too frustrated.

Tristan and Savannah's romance was interesting and developed slowly, but wasn't ever filled with the intense passion or love I was looking for. At times, the relationship felt shallow and I couldn't really understand why they liked each other at all. Other times though, they were really sweet together and the romantic in me let out some "aww"s. Unfortunately, Tristan is set to be the Clann's next leader, his family having led for four generations, and his relations with Savannah could start a full-blown war between the groups. *looks down on naughty behaviour* Come on, guys…

Overall, Crave may be something you really enjoy but it just wasn't for me. I didn't like the dramatic nature of things and wished the main character was more admirable. With better characterisation and a better planned plot, I would've really liked this! Savannah's caught in a war much bigger than herself and must make a lot of tough decisions. Maybe it was too much for a fifteen year old to handle, but better luck for her in the sequel! I'm curious about what'll happen next but will wait for other reviews first to see if I should dive in!

Yes, I hate negative reviews and low ratings but it had to be done... I was tossing up between this and a 3, but I think of 3 as "average". I got too angry reading this to have an "average" opinion LOL. Anyways, lots of people loved this. What about you?
Find Melissa on Twitter, Goodreads, Facebook, her website and blog.
Buy Crave from Amazon, The Book Depository and Barnes & Noble.