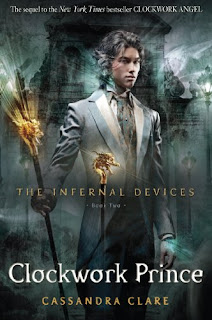 The situation at the London Institute has never been more precarious. With Mortmain and his clockwork army still threatening, the Council wants to strip Charlotte of her power and hand the running of the Enclave over to the unscrupulous and power-hungry Benedict Lightwood. In the hope of saving Charlotte and the Institute, Will, Jem, and Tessa set out to unravel the secrets of Mortmain’s past—and discover unsettling Shadowhunter connections that hold the key not only to the enemy’s motivations, but also to the secret of Tessa’s identity. Tessa, already caught between the affections of Will and Jem, finds herself with another choice to make when she learns how the Shadowhunters helped make her a “monster.” Will she turn from them to her brother, Nate, who has been begging her to join him at Mortmain’s side? Where will her loyalties—and love—lie? Tessa alone can choose to save the Shadowhunters of London…or end them forever.

Once again, Cassandra Clare has written a novel that will make fans run screaming to the ends of the earth. Our favourite characters return to make our hearts sizzle and we finally get the answers we've been craving since the first book. Why is Will so nasty? What's his big dark secret? What can Tessa do for him and Jem, who's dying? As time runs out for Tessa and her friends to save the Shadowhunting world, brilliant secrets may very well uncover opportunities that will change their lives forever.
Clockwork Angel ended with Will asking Magnus for help, and their investigations continue throughout this book, providing lots of suspenseful tension. This secret has everything to do with why Will is how he is and as he begins ridding himself of his baggage, he opens up to Tessa and the possibility of a relationship between them becomes very real. Most readers will rejoice that they're finally coming together, but kind-hearted Jem will always be at the back of your mind. This love triangle is at its peak as both men prove themselves to be equally deserving and determined to win Tessa's heart. They both love her, they both fight for her, they both make strong promises and capture her in passionate embraces. By the end of the book, the bombshell will have dropped and decisions will have been made. The boys are unaware of each other's affections for Tessa and this leads to something that will change the game completely. Will everyone recover? How will things end in Clockwork Princess? Prepare for this book to leave your mind and heart battling!


"If I might make a suggestion," said Will. "About twenty paces behind us, in the Council room, is Benedict. If you'd like to go back in there and try kicking him, I recommend aiming upward and a bit to the left-"

On the other side of things, Charlotte's position as the head of the Enclave is threatened by Benedict Lightwood, and she'll be challenged unless she can find Mortmain's whereabouts in two weeks. As always, there are plenty of plot twists to keep you entertained, with characters changing their positions and motives constantly. Tessa's traitor brother, Nate, is deeply involved in the situation and begins abusing his hold over Jessamine. This exciting adventure will keep you on your toes and guessing until the very end! Some things you might see coming while others will come as a complete shock. Many little clues over the series begin adding up until we finally reach a horrifying realisation. We can only keep our fingers crossed for the villains not to win!

Overall, Clockwork Prince is an amazing book that's unbelievably better than the first. The characters (including many secondary) develop in ways you wouldn't believe and Mortmain's attacks become more desperate and vicious as the gang come closer and closer to thwarting his plans. Whether you're itching to solve the mystery, lose yourself in Will's beautiful blue eyes or faint at Jem's romantic gestures, this book is for you. My review really doesn't do the book justice so please just promise me you'll read it!

Who blew your mind? Will or Jem? Which trailer is your favourite? :)

"I have wanted to do this," he said, "every moment of every hour of every day that I have been with you since the day I met you. But you know that. You must know. Don't you?"
She looked up at him, her lips parted in bewilderment. "Know what?" she said, and Will, with a sigh of something like defeat, kissed her.

Her fingers wound tightly in his shirt, Tessa drew Jem down onto her, taking the weight of him onto her body with the feeling that she was being given back something that had belonged to her forever, a bit of her that she had missed without knowing she was missing it.

Find Cassandra on Twitter, Goodreads, Facebook, her website and blog.
Buy Clockwork Prince from Amazon, The Book Depository and Barnes & Noble.
Posted by Lisa at 6:19 PM