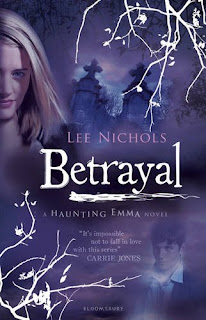 Emma Vaile is the most powerful ghostkeeper in centuries. Which is great for battling the wraith-master Neos and horrible for her social life. Emma knows fellow ghostkeeper Bennett Stern is her soul mate, but when ghostkeepers fall in love, the weaker one loses all power. And until Neos is defeated, Bennett and Emma can't risk it. When the temptation of being with Emma gets to be too much, Bennett disappears, pursuing a dangerous path to increase his powers. Heartbroken and alone, Emma tries to lose herself in school. But when the Knell, a secret ghostkeeping society, sends two new ghostkeepers to Echo Point—one a snarky teen guy, the other a British scholar—Emma throws herself into training to battle Neos. But as the team grows stronger, so do the ghosts. And worse, one of their own will betray them. One Emma never suspected...
My favourite thing about this series is how the Lee Nichols always manages to weave light-hearted humour in amongst the tense action and suspense. No longer is Emma having fun discovering her powers, but forced to train like a warrior in order to defeat Neos before he overthrows the Knell. As she visits the Knell HQ with Bennett, the two find themselves under a surprise attack and realise everything they've ever believed was false. Not only is the Knell unsafe from their enemies, but ghostkeeping powers are changing, with abilities being able to be used in reverse.

After Neos killed her friend and sort-of crush, Coby, Emma becomes the school outcast and is blamed for the golden boy's "suicide". If you loved his character in Deception, you'll be over the moon when you see him summoned as a ghost. He's impossibly better looking and even funnier than before! There's just something about being able to fly around and be cheeky all the time.. Along with Coby, Simon and Lukas are new additions to the cast from the Knell, the former acting as their strict trainer and guardian, and the latter as a loveable flirt. Lukas really takes cute to another level. His constant tongue-in-cheek humour will make you giggle and fall in love - I know he's my favourite character!


“Where?” Natalie said. Then she blurted, “Hey! Lukas!”
“Sorry, dude,” he apologized. “I thought you were a street sign.”
“Yeah? Well, it says, ‘No Groping.’ ”
Now I felt like saying “bloody teenagers.

At the beginning of Betrayal, Emma and Bennett are the sweetest couple for miles but things begin falling apart after the attack at HQ. Even though Bennett is willing to give up his ghostkeeping powers to be with Emma, he decides to stay in New York with the Knell, refusing to be with her until they've killed Neos. It was heartbreaking to see them separated because Emma seems alone and lost in thought most of the time, dealing with all of her issues internally. I greatly missed the affection and banter she shared with Bennett, along with their easy closeness. But as the novel progresses, we learn shocking secrets about Bennett…ones that could ruin his life forever. You won't believe your eyes! How will they fix this?

Fans of Deception, you'll love the mystery and fast-paced action of this sequel. Neos plays the characters like puppets and Betrayal is one twist after another. It's got to stop some time, right?? Emma becomes an even stronger character, balancing her need to heal her friends' hearts, look after ghost Coby, save her relationship with Bennett, get into contact with her MIA family, kill Neos and bat away a mind-controlling siren! Her plate is overflowing yet she manages to keep her head and remain focused. With traitors and confusing riddles all around, expect another entertaining novel that will have you extremely excited for the third book!

Have you read this series? Are you a fan? :)
Find Lee on Twitter, Goodreads, Facebook, her website and blog.
Buy Betrayal from Amazon, The Book Depository and Barnes & Noble.
Posted by Lisa at 8:37 PM