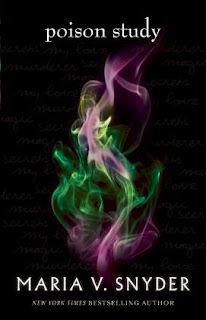 On the eve of her execution for murder, Yelena Zaltana is offered an incredible reprieve - on the condition that she becomes the food taster for the military leader of Ixia, Commander Ambrose. Avoiding poison is the least of her troubles, however ... General Brazell, father of the man she killed, has vowed bloody revenge; she's beginning to have feelings for her captor, Valek; and someone is plotting the downfall of the current regime. In a desperate race against time, Yelena must learn to control the growing magical talent withinn her and master the demons of her past. The Commander's life, the future of Ixia and all those she loves depend on it.
I never expected to love this series so much. I was blown away by how much I adored certain characters and detested others! If the sizzling romance doesn't do it for you…..perhaps the exciting action and magical plot? Maria V. Snyder has written yet another amazing series I hope everyone will read. Although Poison Study certainly has an adult novel feel to it (minus the adult content), fans of the young adult genre will easily become accustomed to the more mature themes!

19 year old Yelena is a prisoner in Commander Ambrose's dungeon, about to be executed for murdering General Brazell's son, Reyad. She is granted a reprieve when Valek, the Commander's security chief, offers her the position of the Commander's food taster. Valek poisons her with Butterfly's Dust, ensuring that she returns every morning to receive the antidote. Huge nailbiter, am I right? Yelena and Valek's relationship only gets more amazing as the book continues. We see sides of both that we never expect, as they learn from each other and break down the walls encasing their hearts. This coupling…gosh, how much I love it! I could happily read 10 books about their adventures together, it's that good! Along with Valek, Yelena befriends soldiers and other workers in the castle. Janco and Ari are particular favourites of mine but as for everyone else, you'll be questioning their motives and wondering who in the castle is an outsider spy! *gasp*

Yelena is a magic-wielder whose abilities come out in her times of need, something we begin to explore in this first book. Yelena was mentally and physically abused in the orphanage she lived in with General Brazell and Reyad, so we're really able to see her strength of character, as can Valek. Yelena lives in the North, where magic is strictly forbidden, but in the enemy territory of the South she can be taught about her skills, as they embrace magic. Tension between the two lands slowly builds, setting the foundations for the sequels!

Poison Study is a fantastic book with realistic characters you can't help but love. As the plot unravels bit by bit, Yelena and Valek come closer and closer together…. Team Valena badges need to be made! They are absolutely swoon-worthy. This novel will mess with your mind, full of shocking twists and suspenseful action throughout. A stand out read!

Find Maria on Goodreads, Facebook, her website and blog.
Buy Poison Study from Amazon, The Book Depository and Barnes & Noble.
Posted by Lisa at 7:53 PM