Review: Only The Good Spy Young 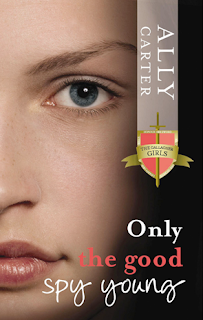 When Cammie Morgan enrolled at the Gallagher Academy, she knew she was preparing for the dangerous life of a spy. What she didn’t know was that the serious, real-life danger would start during her junior year of high school. But that’s exactly what happened two months ago when Cammie faced off against an ancient terrorist organization dead set on kidnapping her. Now the danger follows her everywhere, and even Cammie “The Chameleon” can’t hide. When a terrifying encounter in London reveals that one of her most-trusted allies is actually a rogue double-agent, Cammie no longer knows if she can trust her classmates, her teachers—or even her own heart.
Wow, this book was an absolute rollercoaster! My stomach was turned inside out and my brain was pestered with endless questions. Carter really makes us think and question everything we've ever known. Secrets and mysteries have been growing from the very first book and we're now inching closer and closer to the finishing line!

I guess it's obvious what you can expect from this book. Your attitudes towards certain characters will change, shocking revelations will be made and you'll get to see scenes you've been waiting to see for years! We delve into Cammie's past and finally get some real answers. Strap in because we're going for a bumpy ride!

Only The Good Spy Young is very plot-centric and I really can't say much without giving everything away. Everything you need to know about this great book is basically summarised in the previous paragraph! Your mouth will be left agape for the majority of the novel and well, that's it…

I really enjoyed this novel because, like I said, we learn more about characters and their pasts. Some discoveries are more shocking than others but they're all still good to know! The only thing that did irk me a little about the book was the ending. I felt like berating Cammie but I guess we'll have to wait and see what happens in Out of Sight, Out of Time! I admit, I'm a little devastated that this series will be ending soon. I could follow these characters forever!