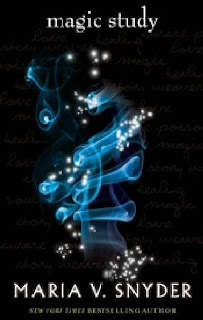 You know your life is complicated when you miss your days as a poison taster... With her greatest enemy dead, and on her way to be united with the family she'd been stolen from long ago, Yelena should be pleased. But although she has gained her freedom, she once again finds herself alone - separated from her lover Valek and suspected as a spy for her reluctance to conform to Sitian ways. Despite the turmoil, she's eager to start her magic training - especially as she's been given one year to harness her power or be put to death. But her plans take a radical turn when she becomes embroiled in a plot to reclaim Ixia's throne for a lost prince - and gets entangled in powerful rivalries with her fellow magicians. If that wasn't bad enough, it appears her brother would love to see her dead. Luckily, Yelena has some old friends to help her with her new enemies.
As Yelena arrives in the Zaltana homestead, her parents welcome her with open arms. She is reunited with those she once knew but not everyone is as accepting. Some members of the clan, including her older brother Leif, suspect her of being an Ixian spy because she's "different". Magic Study follows Yelena's journey of exploring her magical abilities and deciding what's more important to her - the friends and man she loves in the North or her family and magic in the South?

Magic Study blew my mind. With conflicts coming from the left and right, you won't know where to look! Firstly, the embracement of magic in Sitia is a complete contrast to the forbiddance in Ixia. The Council consists of four master magicians as well as eleven representatives from each clan. Irys, one of the master magicians, is Yelena's mentor and teaches her about the magic she possesses. With training, Yelena discovers that she has the ability of mind control and...something extra. *wink*

Yelena's internal struggle is almost agonising. Her parents are lovely and compassionate people, but Leif tries impossibly hard to drive her out of Sitia. His hatred stems from his feelings of jealousy, abandonment and guilt, which you'll learn all about as the novel progresses! To make things more difficult, her love for Valek must be kept a secret, as he has a reputation for being a cold-hearted Sitian assassin. Yelena, of course, knows another side of him but something tells her that her family won't listen…..

With battles for power, murderers, soul stealing and strange magical abilities, Magic Study is another great novel in the series. Poison Study will always be my favourite but this was still a wonderful read. Even though Yelena's in the South, Valek finds a way to visit so you'll get a nice dose of excitement and romance, don't you worry!

Find Maria on Goodreads, Facebook, her website and blog.
Buy Magic Study from Amazon, The Book Depository and Barnes & Noble.
Posted by Lisa at 8:24 PM