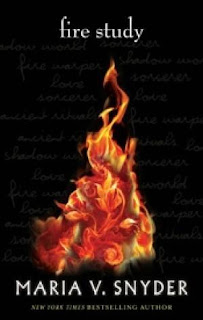 When word that Yelena is a Soulfinder—able to capture and release souls—spreads like wildfire, people grow uneasy. Already Yelena's unusual abilities and past have set her apart. As the Council debates Yelena's fate, she receives a disturbing message: a plot is rising against her homeland, led by a murderous sorcerer she has defeated before.... Honor sets Yelena on a path that will test the limits of her skills, and the hope of reuniting with her beloved spurs her onward. Her journey is fraught with allies, enemies, lovers and would-be assassins, each of questionable loyalty. Yelena will have but one chance to prove herself—and save the land she holds dear.
The final installment of the Study series is as confusing as ever. As we reach the pinnacle of the story, Yelena is forced to face her fears and take control of her powers, once and for all. This novel is definitely one that takes your mind in circles until the very end! While I didn't enjoy Fire Study as much as the first two books, it was still a great read after the initial slow start.

Once again, the characters are superb. The secrets they've been hiding are finally revealed, and we get answers to the questions which have been burning through our minds since day one. We also meet some helpful characters like Opal, a glassmaker who is able to capture "light" in her pieces. While Opal's role isn't large, you'll be able to familiarise yourself with her before reading the Glass series. Yes, we get to return to this fabulous world in the spin-offs. What a pleasure! Yelena and Valek are as charming as ever. Valek will, as always, make you feel the need to fan yourself and Yelena continues to draw out his sexy side with her mere presence. How tortuous!

Your detective skills will be called upon, as we finally figure out who are the allies and who are the enemies. Some traitors you'll expect…others will take you by surprise. Interested? With threatening messages delivered by a figure in fire, kidnappings, mass murders and betrayals with fatal consequences, your head will be spinning in all directions, trying to keep up with things. In the middle of panic-filled conflicts, you can only hope Snyder will have a heart and not kill off your favourite characters. I must've lost a few years off my life and a cup of tears while worrying myself! *sighs*

While the storylines are amazing, it's the characters that really make the Study series exquisite. You'll feel a sense of loss as you turn the last page and leave Valek and Yelena to enjoy their lives together. What they'll get up to…we can only imagine, but luckily the two will make some lovely appearances in the spin-off series to sate our hunger for more! A fabulous ending to the Study series, filled with love and hope.

Have you read the Glass series? What did you think? :)

Find Maria on Goodreads, Facebook, her website and blog.
Buy Fire Study from Amazon, The Book Depository and Barnes & Noble.
Posted by Lisa at 7:02 PM