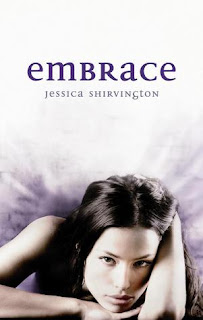 Violet Eden is dreading her seventeenth birthday dinner. After all, it’s hard to get too excited about the day that marks the anniversary of your mother’s death. The one bright spot is that Lincoln will be there. Sexy, mature and aloof, he is Violet’s idea of perfection. But why does he seem so reluctant to be anything more than a friend? After he gives her the world’s most incredible kiss – and then abandons her on her front doorstep – Violet is determined to get some answers. But nothing could have prepared her for Lincoln’s explanation: he is Grigori – part angel and part human – and Violet is his eternal partner. Without warning, Violet’s world is turned upside down. She never believed in God, let alone angels. But there’s no denying the strange changes in her body ... and her feelings for Lincoln. Suddenly, she can’t stand to be around him. Luckily, Phoenix, an exiled angel, has come into her life. He’s intense and enigmatic, but at least he never lied to her. As Violet gets caught up in an ancient battle between dark and light, she must choose her path. The wrong choice could cost not only her life, but her eternity...
I had no idea what to expect from this book but I was immensely pleased by what I discovered. Embrace is filled with fantastic characters who are interesting, deep and have some amazing stories to tell. Violet's mother died during childbirth and her father is usually absent, away at work. The person she feels closest to is Lincoln, her trainer and sports buddy, and although he is five years older than her, they have a wonderful relationship with a closeness and affection that only comes from being such good friends. But...they both like each other in a more-than-friends way…what will come of it?

Ever since Violet turned seventeen, things have been different. She discovers new abilities and physical changes, along with the fact that she's in some serious danger. I enjoyed seeing Violet's internal struggle between her desire to be a normal teenager and her destiny as someone who will change the world. The fascinating mythology references some old legends and passages from the Bible, while having unique twists and additions at the same time. The even balance between mythology, plot and romance was excellent!

Lincoln and Violet….oh, what to say about this couple. I wish I could tie them together with some rope and force them to talk to each other! Perhaps I could force a kiss or two? Lincoln is surrounded by an air of mystery and is unattainable. As the two are destined Grigori partners, they can't let themselves like each other romantically, as it will weaken them and make them vulnerable. Then there's Phoenix, an exile who comes without the baggage and rules, and genuinely cares about Violet's welfare. The two men are polar opposites and pull Violet in two different directions. Unfortunately, I love them both and can't decide which I prefer! Sexual tension and unrequited love is thick in the air… This love triangle is written exquisitely and allows both men to have their moments.What's poor Violet to do?

Overall, Embrace is thoroughly enjoyable with a great narrator. Violet's sarcastic and fun voice will easily carry you through this lengthy book and by the end, you'll have been consumed by the steamy romance. After shocking revelations, you'll be desperate for Enticed to see how the compelling story continues!

I love this series. The books get better as they go along! 5 star ratings are coming up ;) Very lucky to be an Australian! <3 I love our covers too. What do you think of the others? How will the US one turn out, do you think?

Find Jessica on Goodreads, Facebook and her website.
Buy Embrace from Amazon, The Book Depository and Barnes & Noble.
Posted by Lisa at 9:42 PM