Violet has come to terms with the fact that being part angel, part human, means her life will never be as it was. Now Violet has something Phoenix - the exiled angel who betrayed her - will do anything for, and she has no intention of letting it fall into his hands. The only problem is that he has something she needs too. Not afraid to raise the stakes, Phoenix seemingly holds all the power, always one step ahead. And when he puts the final pieces of the prophecy together, it doesn't take him long to realise exactly who he needs in order to open the gates of Hell. With the help of surprising new allies, ancient prophecies are deciphered, a destination set and, after a shattering confrontation with her father, Violet leaves for the islands of Greece without knowing if she will have a home to return to...

I recently read Embrace and Enticed - loved them to death. So excited for this!!

Wilde Island is in an uproar after the recent death of its king. The uneasy pact between dragons, fairies, and humans is fraying, and a bloodthirsty witch hunter with a hidden agenda whips villages into frenzies with wild accusations. Tess, a blacksmith’s daughter from a tiny hamlet near the mysterious Dragonswood, finds herself caught in the crosshairs of fate when she is accused of witchery and has to flee for her life along with her two best friends. Not even Tess’s power to see the future can help the girls as they set off on their desperate journey, but she keeps having visions of a man wielding a sword. And when she finally meets him, Tess has no idea how to handle the magnetic attraction she feels for him, or the elusive call she hears from the heart of the Dragonswood. In this epic romance, an ancient prophecy comes true in a way neither dragon, fairy, nor human would have predicted. 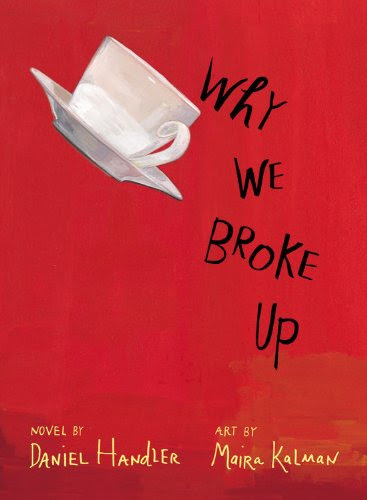 I'm telling you why we broke up, Ed. I'm writing it in this letter, the whole truth of why it happened.

Min Green and Ed Slaterton are breaking up, so Min is writing Ed a letter and giving him a box. Inside the box is why they broke up. Two bottle caps, a movie ticket, a folded note, a box of matches, a protractor, books, a toy truck, a pair of ugly earrings, a comb from a motel room, and every other item collected over the course of a giddy, intimate, heartbreaking relationship. Item after item is illustrated and accounted for, and then the box, like a girlfriend, will be dumped

Wow. This sounds like a sweet, yet heartbreaking, story. I absolutely cannot wait to read it!

What's on your WOW this week? Leave your thoughts and links! :)
Posted by Lisa at 3:27 PM