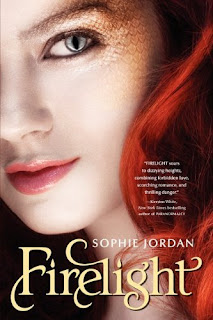 Marked as special at an early age, Jacinda knows her every move is watched. But she longs for freedom to make her own choices. When she breaks the most sacred tenet among her kind, she nearly pays with her life. Until a beautiful stranger saves her. A stranger who was sent to hunt those like her. For Jacinda is a draki—a descendant of dragons whose greatest defense is her secret ability to shift into human form. Forced to flee into the mortal world with her family, Jacinda struggles to adapt to her new surroundings. The only bright light is Will. Gorgeous, elusive Will who stirs her inner draki to life. Although she is irresistibly drawn to him, Jacinda knows Will's dark secret: He and his family are hunters. She should avoid him at all costs. But her inner draki is slowly slipping away—if it dies she will be left as a human forever. She'll do anything to prevent that. Even if it means getting closer to her most dangerous enemy. Mythical powers and breathtaking romance ignite in this story of a girl who defies all expectations and whose love crosses an ancient divide.
Firelight is captivating with its shining characters, exciting storylines and wonderful concept. I've always loved dragons and was absolutely delighted to see a novel with them as the central creatures! In fact, this was my first dragon novel and I am very proud to say that I am a fan. Jacinda Jones is a draki with the power of fire-breathing, a power not possessed by any other for over four hundred years. Jacinda's rare ability makes her a prized possession of her pride, but her mother and sister are determined to live their lives with humans as neither understand her desire for the dragon lifestyle. Firelight deals with Jacinda's struggles to save her dragon before it is killed by being dormant in the hot, suffocating desert of her new home, and I think this novel is a brilliant start to a series that will surely excite any fans of the supernatural, romance and action genres!


When emotions run high, the draki surfaces. In times of fear, excitement,
arousal...the draki comes out.

The novel is filled with beautiful descriptions of the landscape and dragons. Firelight showcases many types of these creatures, each with their own unique ability which you will love. Whether the dragon controls the earth, water, fire, invisibility, strength or speed, there is something for you! But not everything's fun and games: Hunters capture draki to sell them to enkros who desire their magical blood, beautiful flesh and ability to find gems in the earth, so when Jacinda is captured but released by Will, she is confused by the hunter's sympathy as he takes them on a journey they both never thought possible. After her mother selfishly kidnaps the family away to live a "normal life", Jacinda must attend a public school which the mysterious Will also frequents... Cue the amazing romance! The two have the kind of unconditional and passionate love we all love to read about and this couple has easily made it onto my list of favourites. Your heart will thud in happiness and devastation throughout the book but no matter what, you will love them. Watching the hardened hunter and wary dragon fall in love was exhilarating. How can you not love their easy banter, longing gazes and protective embraces?


Crazy as it sounds, Will’s my refuge. Someone who knows everything about me. And likes me anyway. Loves me. Understands me. Isn’t out to change me. He’s the only one I can say that about.

If you don't just want a typical romance with some dragon thrown in, you can definitely expect to find some mystery and action! Some people aren't as they seem and you'll have a lot of fun trying to figure them out. Of course, those hunters are still desperately trying to capture Jacinda and her family so…we're in for a bumpy ride! There will be shocking twists in this heart-stopping novel to trip you up and have you holding your breath in wait...

I had my reservations at first but can easily say that I was very stupid to be! How could I doubt Sophie's writing? It's spellbinding and will hold you in its clutches until the very end. The first novel of the Firelight series has most definitely set itself up well for the future books! Cliffhangers are always terrible....aren't we lucky that Vanish has already been released?

Firelight was optioned for film last year - I think this would make a fantastic movie! Who's with me? Have you got your dream cast picked out? ;)
Find Sophie on Twitter, Goodreads, Facebook and her website.
Buy Firelight from Amazon, The Book Depository, Barnes & Noble and Borders.
Posted by Lisa at 5:09 PM