So many exciting things have happened/been announced recently!
Firstly, check out the cover of Surrender by Elana Johnson! Very pretty! While I wasn't a huge fan of the first book, the second does sound intriguing... Ooh, the theories are spinning already! Are you excited about this book?

Forbidden love, intoxicating power, and the terror of control… Raine has always been a good girl. She lives by the rules in Freedom. After all, they are her father’s rules: He’s the Director. It’s because of him that Raine is willing to use her talent—a power so dangerous, no one else is allowed to know about it. Not even her roommate, Vi. All of that changes when Raine falls for Gunner. Raine’s got every reason in the world to stay away from Gunn, but she just can’t. Especially when she discovers his connection to Vi’s boyfriend, Zenn. Raine has never known anyone as heavily brainwashed as Vi. Raine’s father expects her to spy on Vi and report back to him. But Raine is beginning to wonder what Vi knows that her father is so anxious to keep hidden, and what might happen if she helps Vi remember it. She’s even starting to suspect Vi’s secrets might involve Freedom’s newest prisoner, the rebel Jag Barque....
Ah, the lovely Forgotten by Cat Patrick! Who was shocked when Cat announced that it would be a stand-alone? *raises hand* WELL, before we had the lovely Hailee Steinfield picked out to play London and now we have a screenwriter for the film! Check out the report here ;) Will you go and watch this in the cinema? I think the story will be fantastic on the big screen! Besides, Hailee's gorgeous and has won/been nominated for a lot of awards! London's in good hands ;)

Hourglass by Myra McEntire has been optioned by 20th Century Fox! Another book that would be great as a film! I'll be reading this very very soon and I can't wait! It sounds absolutely wonderful and most people seemed to enjoy it ;) The ARC cover for Timepiece was also leaked this week. Gorgeous though, right? I'm loving it and if this isn't even the final cover....wow! Which is your favourite?

Fabulous character posters from The Hunger Games have been released! Are you loving them? I am delighted that Peeta's hair is blond! Much better than that brown he was sporting before! ;) Click for larger HQ versions! Which is your favourite? Peeta, Katniss, Gale, Rue, Cato, Effie, Haymitch or Cinna?

Want the countdown for Pure by Jennifer L. Armentrout? Grab it here! I'm so excited for this book - are you? Half Blood was fabulous and I'm so glad everyone else finally has the chance to read it! It was a long wait from ARC distribution to now!

Have you read Tera Lynn Child's Sweet Venom? Or perhaps her Fins series? Well, she's just announced today that there will be a third Fins book! I'm really glad to hear this :) Next month I'll basically be marathoning her books! Sweet Venom, Fins series, Gods series... *nods* Really looking forward to it! What did you think of her books? :)

Unearthly by Cynthia Hand is being developed by the CW! Yes, the guys who make The Vampire Diaries, Supernatural, etc. The awesome ones. The script is currently being written - let's hope this gets made! It would do well as a series, I think! Lots of story to tell :) Looking forward to it?

Kim Harrington has gone a little mad and made these crazy pictures of herself! 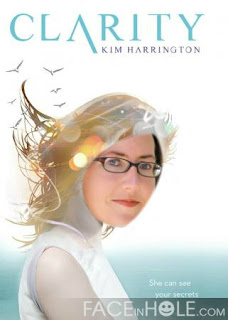 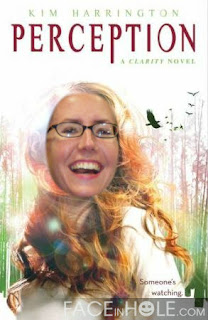 If you want to join her...add your face to Clarity or to Perception! Are we excited about Perception? I am! Loved the first book ;)
Oh, and Harper Collins has launched a new Facebook page! Check out the Summer of Supernatural! It all begins November 1st ;)
What's made your day?
Posted by Lisa at 12:47 PM