Review: The Girl of Fire and Thorns 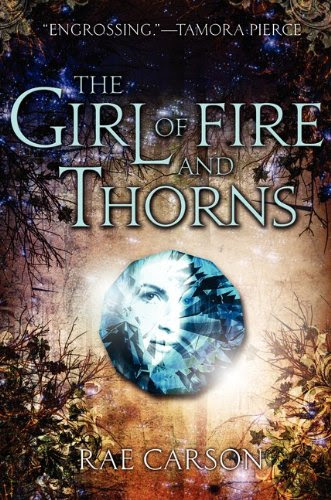 Once a century, one person is chosen for greatness.  Elisa is the chosen one. But she is also the younger of two princesses, the one who has never done anything remarkable. She can’t see how she ever will. Now, on her sixteenth birthday, she has become the secret wife of a handsome and worldly king—a king whose country is in turmoil. A king who needs the chosen one, not a failure of a princess. And he’s not the only one who needs her. Savage enemies seething with dark magic are hunting her. A daring, determined revolutionary thinks she could be his people’s savior. And he looks at her in a way that no man has ever looked at her before. Soon it is not just her life, but her very heart that is at stake. Elisa could be everything to those who need her most. If the prophecy is fulfilled. If she finds the power deep within herself. If she doesn’t die young. Most of the chosen do.


If you're looking for a novel which completely changes your opinion of the main character as the story progresses, this is the one for you. Overweight, lazy and ugly, Elisa finds herself wedded to King Alejandro, a handsome man who surprisingly does not look at her in disgust. The Girl of Fire and Thorns is about Elisa's journey to become a fierce, strong, fit and brave leader. The character development is executed wonderfully and the exaggerated negative characterisation of Elisa in the beginning only furthers the extreme transformation. On her dedication day as a baby, God's light washed over her and blessed her with a Godstone, a sign that she has been chosen by God to fulfil an important purpose. She must complete her service whether or not she realises she is doing it, even if she disagrees with the path laid out before her and even if she might not survive. Most die before accomplishing anything. It's all she can do to hope for a happy ending.

While the beginning was unique and interesting, it was a little hard to understand, with all of the strange names, locations and history. But soon enough, after the first few chapters, things just began to make sense and here's where the journey starts! Initially, it was very difficult for me to read about such a pathetic protagonist, and Elisa's transformation by the end of the book is absolutely amazing. When she gets kidnapped in the night, she loses weight and learns how to survive on her own. She also manages to lead a group of otherwise hopeless people to safety, with vicious enemies planning to destroy their villages. At times the novel was serious and sad, and at others it was lighthearted, fun and exciting. Elisa's adventures are fascinating and oh so interesting to read about! She's a genius!

One of the people who kidnapped Elisa was Humberto, a boy her age with the skills of someone much older. He sees Elisa for the strong person she is from the very beginning and falls in love with her, despite her marriage to King Alejandro. Carson positions us to favour this relationship, as it is healthy and full of honesty, rather than the passionless and false relationship between the King and Queen. Alejandro has a mistress - can you believe it? He isn't keen to tell others about his secret marriage either...tut tut. I must say, though, his son Rosario is the most adorable thing! You'll definitely fall in love with him.

The conclusion of The Girl of Fire and Thorns is perfect. Everything just falls into place and feels right - peaceful. I cannot wait for the sequel to see what Queen Elisa will do next! Now that she's come into herself and her powers, I'm sure she has many great adventures ahead of her.

Did you read this too? What did you think? Excited to get your hands on this! ;)

Find Rae on Twitter, Goodreads, Facebook and her website.
Buy The Girl of Fire and Thorns from Amazon, The Book Depository and Barnes & Noble.
Posted by Lisa at 12:17 AM