Possess by Gretchen NcNeil
Fifteen-year-old Bridget Liu just wants to be left alone: by her mom, by the cute son of a local police sergeant, and by the eerie voices she can suddenly and inexplicably hear. Unfortunately for Bridget, it turns out the voices are demons – and Bridget has the rare ability to banish them back to whatever hell they came from. Terrified to tell people about her new power, Bridget confides in a local priest who enlists her help in increasingly dangerous cases of demonic possession. But just as she is starting to come to terms with her new power, Bridget receives a startling message from one of the demons. Now Bridget must unlock the secret to the demons' plan before someone close to her winds up dead – or worse, the human vessel of a demon king.
The summary sounds unique and interesting so I'm very curious to see how I like it! Has anyone read this already?

Bloodlines by Richelle Mead
When alchemist Sydney is ordered into hiding to protect the life of Moroi princess Jill Dragomir, the last place she expects to be sent is a human private school in Palm Springs, California. But at their new school, the drama is only just beginning. Populated with new faces as well as familiar ones, Bloodlines explores all the friendship, romance, battles and betrayals that made the #1 New York Times bestselling Vampire Academy series so addictive - this time in a part-vampire, part-human setting where the stakes are even higher and everyone's out for blood.
Must I say it? This book is 100% amazing and I can't wait to get my hands on a copy! Hopefully this arrives in my mailbox quickly, seeing as The Book Depository is now processing my order :) Deathly jealous of you evil Americans who got this from BEA! 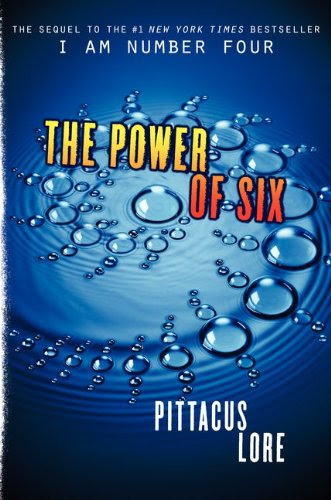 The Power of Six by Pittacus Lore
I've seen him on the news. Followed the stories about what happened in Ohio. John Smith, out there, on the run. To the world, he's a mystery. But to me . . . he's one of us.
Nine of us came here, but sometimes I wonder if time has changed us—if we all still believe in our mission. How can I know? There are six of us left. We're hiding, blending in, avoiding contact with one another . . . but our Legacies are developing, and soon we'll be equipped to fight. Is John Number Four, and is his appearance the sign I've been waiting for? And what about Number Five and Six? Could one of them be the raven-haired girl with the stormy eyes from my dreams? The girl with powers that are beyond anything I could ever imagine? The girl who may be strong enough to bring the six of us together?
I quite enjoyed I Am Number Four so hopefully this sequel is just as good! At first I was very worried about the complete narrator change but from what I've heard, Seven's got a good story. Fingers crossed, eh?


Three great books, all released on August 23rd. My mailbox will have a blast! ;) What are you waiting on this week?
Posted by Lisa at 3:50 PM