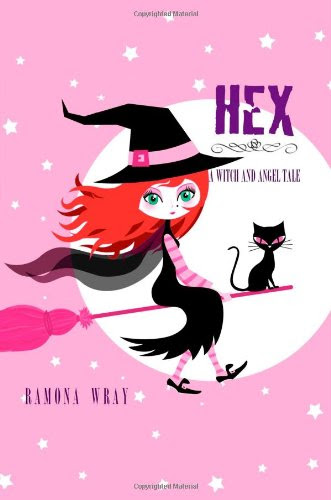 Like most girls at Rosemound High School, seventeen-year-old Lily Crane is acutely aware of Ryder Kingscott. Hands down the cutest guy in school, Ryder is cool, mysterious, and utterly untouchable…especially for Lily. For when she touches someone, Lily instantly learns all about their lives. And while such a skill might seem nifty, in truth it is wrecking Lily’s life. So she is shocked when Ryder asks her out — and even more shocked to discover he has a rival. Lucian Bell is the gorgeous new kid who can’t take his eyes off of Lily. Being pursued by two hotties should make a girl happy, but Lily is skeptical. The boys act as if they’ve met before, hating each other with a passion that could only be rooted in a dark, dangerous past. A past full of terrible secrets. The kind of secrets that could get a girl killed.


Hex is an entertaining read which will appeal to the young and girly you. Two gorgeous guys fighting over you...what's not to love? Things seem to be going great for Lily, but when Lucian warns her about Ryder, she doesn't know what to think. Visions of a past she can't remember lead Lily to believe that the three know each other from past lives, one where she was in love with Lucian and another with Ryder. Which one is right for her and which one will lead her to her death?

Lily's character is funny and sarcastic at the right times and does her fair share of swooning over the sexy Kingscott. She's never been able to come into contact with people without seeing their futures and experiencing immense pain, so she's elated when she's able to touch Ryder pain-free. I don't want this review to be negative so I'll be brief with my criticism. Lily and Ryder fall in love lightning fast. They literally talk once or twice and then they're in love, with Lily willing to give up her life for him. I feel like I missed the first ten chapters!

The mystery of this novel is all in Lily's past. You learn new pieces of information from different perspectives so Wray will keep you constantly guessing. I really enjoyed this part of the book as it was done well and was interesting. Do curses and repeating histories sound good to you? You're in for a treat! The romance greatly improves by the end of the novel, so much so that I wish it had been like that from the beginning. The second half as a whole is more enjoyable than the first and will ramp up your excitement for a wowing finish! With the characterisation finally up to scratch, I could only wish for more by the time the end came.

Find Ramona on Twitter, Goodreads, Facebook and her blog.
Buy Hex on Amazon, The Book Depository and Barnes and Noble.