YA News This Past Week!

Alright, so some fantastic news has been floating around the blogosphere this past week! Let's touch up on some of those, shall we?
Aimee Carter has started doing her Q&A videos! She's absolutely adorable and I couldn't stop smiling! Her first one is all about Goddess Interrupted. Subscribe to her Youtube channel or blog so that you're notified when her next video goes up!


I'm sure you've seen this already but let's admire it again, shall we? The cover for Spellbound was released and it looks great! I absolutely love this series and can't wait to buy the box set! 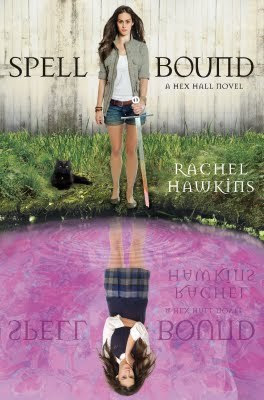 Last week I showed you the countdown widget and motion picture. Here's the official HD still! How gorgeous does it look? *sighs*

Becca Fitzpatrick showed us the cover of the Hush Hush graphic novel! What do you think? Too hulky? Just right? I was honestly expecting a leaner Patch with whiter wings...soft pillowy wings that could hold me while I slept! *sighs*

Supernaturally was released today! Who's got their copy already? Paranormalcy is making its way into my mailbox right now so once I read and fall in love with that, the next book is out and ready to be devoured! If you've read the book, what did you think?

Did you read the news about Comic Con? Did you go? (If so, I'm totally jealous!) There were some author appearances but I actually won't talk about that right now. Have you guys seen the Breaking Dawn videos? I hated the book but I won't lie - I am excited for this movie. I think it'll actually look much better on the big screen because it can't be worse than the book!


Clip 1: Jacob warring with the Cullens and his wolves! I didn't like this one too much but I think it'll be better in the film with everything else. Mood just isn't right here!

Clip 2: Edward and Bella's honeymoon. The world exploded this week. It seemed like no one got this on video and it was absolute hell. Who's excited? Not the best quality but at least we can see something!


Bloodlines is being released next month! The countdown's on! A few words from Richelle...
There are always nay-sayers out there who try to tell me VA readers aren't going to stick with me and read Bloodlines.
Wait a minute! Hold the phone. What are you saying, Richelle?
Challenge: Can Bloodlines get 10,000 pre-orders in a week?
Come on guys, We can hit 10k no problem! I am so excited for this series and I think it'll be just as good, if not better, than the original series. Want to do your part? Run along to Richelle's post!
By the way, how gorgeous is the cover for The Golden Lily? *squee*

If you've made it this far, congratulations! I hope you've come away with something ;)
If you would....please fill in this super short form for me? Just 3 clicks! I'm buying a new series (or multiple) soon and I'd like your advice on which one to read first! Just rank them from 1 to 3 and we're all set! Thank you!