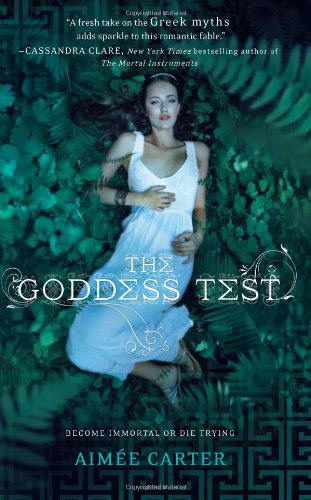 It's always been just Kate and her mom—and her mother is dying. Her last wish? To move back to her childhood home. So Kate's going to start at a new school with no friends, no other family and the fear her mother won't live past the fall.
Then she meets Henry. Dark. Tortured. And mesmerizing. He claims to be Hades, god of the Underworld—and if she accepts his bargain, he'll keep her mother alive while Kate tries to pass seven tests.
Kate is sure he's crazy—until she sees him bring a girl back from the dead. Now saving her mother seems crazily possible. If she succeeds, she'll become Henry's future bride, and a goddess.

When Kate enrols at high school in Eden, she meets Ava, a beautiful girl who is intent on keeping Kate away from her boyfriend. When a nasty prank goes wrong, a rash decision leaves Kate face to face with Henry, a young man who offers Kate the opportunity to become an immortal goddess - one of the many, and the final, replacements of Persephone. The catch? She must spend 6 months with him every single year. At the manor, Kate must face a series of tests and failure is not an option as many things depend on her success. Being a lover of Greek mythology, my interest was immediately piqued and I was very excited to explore it.

While I was expecting amazing tests and interesting mythology, I felt that it didn't deliver and unfortunately have to agree with many other reviewers in that regard. The novel had so much potential for excitement and uniqueness but there just wasn't enough. I wanted to learn more about the gods, the Underworld or just see the Gods have more of a presence in the novel! I wanted more romance. I wanted more action, suspense and focus on the plot. In fact, the tests that Kate faces are not grand or very difficult, nor are they the dominant element on the novel.

I also felt that the characters were not developed enough. There are many who live at the manor with Kate but we do not get to properly meet and get to know them all! I'm still not very familiar with Kate and Henry but hopefully we will learn more about them in the sequel and see their relationship strengthen and have more depth. Kate's a good person but she lacks the personality of a strong and immortal goddess, in my opinion. Henry's cold yet sweet, but I'm not fully attached to him yet. As for the relationship, there are some nice ups and downs which create tension. Even though I wasn't fully invested in their love, I was still behind Kate and cheering her on to get her man.

I'm disappointed that this wasn't the epic tale that I was hoping for, but I really am looking forward to the future books. I have high hopes that they will be fantastic and build on what has been established in this novel. The Goddess Test seems like a set up for good things to come, so I've got my eyes peeled for Goddess Interrupted! Reading the summary of the sequel (which I won't post for spoiler reasons), I'm confident that there will be more romance, action, strong female characters, mythology and overall greatness! Aimee Carter has created a world with lots of potential and the novel, although without mind-blowing twists, is a light read that will keep you entertained.

I'm giving away my ARC of The Goddess Test soon so look out! You just might fall head over heels in love with this book ;)
Posted by Lisa at 12:41 PM