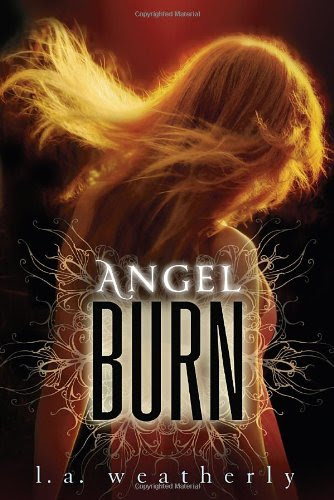 Willow knows she’s different from other girls, and not just because she loves tinkering with cars. Willow has a gift. She can look into the future and know people’s dreams and hopes, their sorrows and regrets, just by touching them. She has no idea where this power comes from. But the assassin, Alex, does. Gorgeous, mysterious Alex knows more about Willow than Willow herself. He knows that her powers link to dark and dangerous forces, and that he’s one of the few humans left who can fight them. When Alex finds himself falling in love with his sworn enemy, he discovers that nothing is as it seems, least of all good and evil. They’re out for your soul . . . and they don’t have heaven in mind.

Unfortunately the first book of the Angel trilogy did not live up to my expectations. From the summary, you'd expect lots of action and dark romance. Is that what we got? Not really. After Willow looks into the future of popular girl Beth Hartley, she sets off a chain of events that catapults her into a new life filled with running and angels. In the novel, angels aren't sweet and humane like angels typically are. Instead, they feed off human energy until the person goes insane, becoming weak or ill with disease. When people experience angel burn, the person doesn't realise what is happening and continues to believe that angels are beautiful creatures. Alex, an assassin trained to kill angels from a young age, is able to see these angels for what they really are and devotes his life to killing them. When Alex is sent an order to kill Willow, he begins questioning what he does and who is running Project Angel.

I really liked the two main characters but they weren't developed enough in my opinion. By the end of the novel, I didn't feel as if I knew them any better than I did in the beginning. Separately, they're two very unique and interesting people but together as a couple, there were no sparks! My big issue with this novel was the romance. Their reluctant fascination with each other was interesting at first but then it turned into a massive cheesefest. For absolutely no reason other than physical beauty, the two become obsessed with each other. There was a constant thought train of "Oh she's beautiful!", "Oh I can't stop staring at her!", "Oh I love her!", "Oh I can't be without her!". It was very difficult to read and this is coming from a romance lover. Completely out of nowhere, Willow says "I was in love with him". There was absolutely no build up which frustrated me to no end! It was simply random and totally unexpected. In fact, it wasn't until after the "I love you"s were said that any emotional connection was present between the two! If the declarations of love and cheesy thoughts had come at the end after they'd actually begun liking each other, I would've liked this novel much more.

Angel Burn constantly switches between first person point of view with Willow and third person point of view with everyone else. This was a little jarring and confusing at first but I guess it just emphasises that Willow is the central character although other stories are being told. I wish the novel was written with more mature language. Though it is young adult, I don't see why the romance had to be dumbed down so much. While the first half of the novel was somewhat painful and tiring to read, things got better in the second half when things began coming together.

Though I enjoyed this new spin on angels, I do not think Angel Burn was executed as well as it could've been. I really loved the idea of two teenagers going on the road and fighting bad guys but things seemed to just happen suddenly and without reason. Angel Burn had lots of potential but in the end, the author didn't take advantage of the characters and plot well enough. I'm not sure whether I'll be continuing on with this series so we'll have to wait and see. Who else has read this? What did you think?

Bumped up to a 3 for the twist on angels.

Buy Angel Burn on Amazon, The Book Depository, Barnes and Noble and Borders.
Posted by Lisa at 1:57 PM