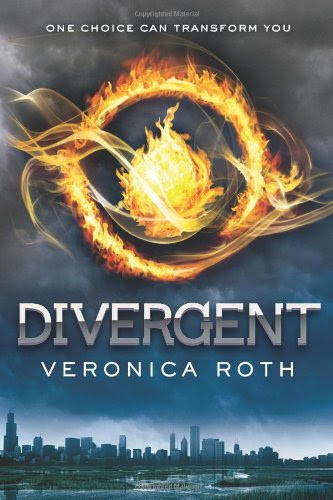 In Beatrice Prior's dystopian Chicago, society is divided into five factions, each dedicated to the cultivation of a particular virtue—Candor (the honest), Abnegation (the selfless), Dauntless (the brave), Amity (the peaceful), and Erudite (the intelligent). On an appointed day of every year, all sixteen-year-olds must select the faction to which they will devote the rest of their lives. For Beatrice, the decision is between staying with her family and being who she really is—she can't have both. So she makes a choice that surprises everyone, including herself. During the highly competitive initiation that follows, Beatrice renames herself Tris and struggles to determine who her friends really are—and where, exactly, a romance with a sometimes fascinating, sometimes infuriating boy fits into the life she's chosen. But Tris also has a secret, one she's kept hidden from everyone because she's been warned it can mean death. And as she discovers a growing conflict that threatens to unravel her seemingly perfect society, she also learns that her secret might help her save those she loves . . . or it might destroy her.

Divergent is most definitely one of my favourite books. I don't think I can sing enough praise for it because it is just pure brilliance. From start to finish, the characters are solid and the plot is perfectly planned and paced. There is never a dull moment which lets the novel fall into the "must read in one sitting" category. Say...you've seen 32945 positive reviews? Rest assured, you'll be feeling the same. The concept of a society separated into coveted virtues is so alluring and intriguing. Living your life in a certain way because you had to? Not telling lies, not allowing yourself to look in the mirror, not fearing death? What. A. Way. To. Live.

The novel begins in Tris' faction, Abnegation, as she prepares for a test which will help her decide her fate. We easily see that she is not able to live her life completely, having to always put others before herself and sparing herself of luxuries. Factions were created to eliminate undesirable qualities but on the contrary, it simply forces people to go too much the other way. Blunt, self-denying, reckless, ignorant and superior - doesn't sound as good, does it? At her chosen faction, Tris is thrown into many exciting situations, ones you'll be begging for more of. Divergent is fast-paced and entirely gripping. The action sequences are written wonderfully and you'll constantly feel a thrill shooting up your spine as you anxiously await more.

Tris is an amazing heroine. Though skinny and weak at first, she becomes resilient and takes things day by day, being mentally strong and taking us on a long emotional journey. I think the character development in this novel was excellent. As Tris fights for what she wants, she matures and becomes a very different person, or rather, discovers who she really was to begin with. The secondary characters are also very enjoyable to get to know as they each have a distinct personality. All of the characters evoked many strong emotions from me, good and bad, going to show how great of an author Roth is.

There's an amazingly good romantic subplot in the novel and that in itself was a mystery! We meet a few male characters early on and for every single one I asked the question, "Is this her love interest?". Unlike many novels where it's obvious who the main character will end up liking, this one comes as a surprise and is not obvious from the very beginning, which I loved! Her love interest turns out to be someone who is complex, intelligent, strong and hot. Where can I get myself one of those?

I felt that this book was similar to The Hunger Games in that it's an action-packed adventure. This book also deals with sacrifices and the idea of doing things you normally wouldn't in order to survive and gain. In saying that, the similarities end there. Divergent is a unique book that will keep you on your toes. Unexpected things happen that will make your jaw drop and heart fracture. You'll be left wide-eyed after the twists. This highly-anticipated novel most definitely lives up to all of the hype and more! Fantastic characterisation and an always exciting plot. What more could you ask for?

Find Veronica on Twitter, Goodreads, Facebook and her website.
Buy Divergent on Amazon, The Book Depository, Barnes and Noble and Borders.
Posted by Lisa at 12:17 AM