Sara Reine is the debut author of Six Moon Summer, which I loved and have reviewed here. She's been lovely enough to provide me with an interview and a copy for one lucky reader to own! Read more information about her new YA novel on Goodreads or the official website. 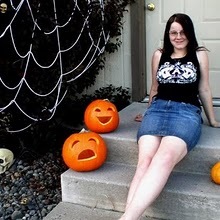 Sara Reine a busybody writer type in her twenties.  She's passionate about YA and urban fantasy and has a terrible habit of judging books by their covers. In addition to writing and baking tasty, tasty cookies, Sara loves chatting with random people on Twitter, cultivating relationships with fellow indie authors, pretending she knows anything about graphic design, and collecting furry black animals.  Yes, living ones.  Four of them.

~x-x-x~
In 50 words or less, tell us why people should read your book?
It's exciting, fun, and fast, and it's totally unlike any werewolf story you've ever read before.

You describe becoming a werewolf as being like a metaphor for growing up. Are there any events or characters in the novel that are based on real experiences or people?
Nothing is specifically based on anyone or any single event, but the general experience of that dramatic coming-of-age is a lot like my time in high school.  When I was about seventeen, I underwent a dramatic change-- a few things happened, so I lost fifty pounds, I found a fashion sense, and I grew a sense of confidence. By the time I was done, I was unrecognizable as the girl I had been at sixteen.  It was nuts.  And great fuel for writing!

What's one interesting thing about yourself that readers don't know?
My day job is in mainframe operations and facilities, which means that I work with BIG COMPUTERS monitoring performance and environmental metrics.  I also do some information processing, although that's getting phased out over time in favor of the facilities end of things.  In other words, it's the least writing-related job in the world!

What is your perfect writing environment?
I like being completely isolated with big puffy headphones in a dark room illuminated by fairy lights (so I can see where I put my wine).  The least sensory information possible helps me really get into the story.

What are your favourite books and authors?
I love the Kushiel series by Jacqueline Carey and everything Stephen King.  Edgar Allan Poe and HP Lovecraft are my all-time favorites, though.  Otherwise I'm not much of an author loyalist. I can't think of a single writer whose work I'll pick up no matter what.

What is one guilty pleasure of yours?
I have no guilty pleasures! I'm shameless. I guess I could feel guilty about loving The Vampire Diaries so much, especially since I'm Team Stefan. Haha!

If you were on an island, what are the five things you would bring?
My family, my pets, a generator, my laptop, and wine. Lots of wine!

Is there anything major in the novel that was changed from your first draft?
No, the final draft is pretty much exactly like the rough draft in terms of content.  Although editing drastically changes the quality of the writing (I write really crummy first drafts), I only added about two scenes and didn't cut anything significant.

Have you started writing the sequel, All Hallows Moon, yet? If so, how much?
I'm in the midst of All Hallows Moon now!  I had to write the beginning about six times to figure out where the book needed to begin, though, so I'm not as far as I'd like.  Second books are so much harder than first books, but I am on track to have it out in fall 2011.

Do you have any ideas for another series in mind at this point?
Yes, actually, I do. I have an urban fantasy series for adults slated to begin summer 2012 about a very different heroine than Rylie, but I don't want to get into it too much yet.  :) Thank you!


~x-x-x~
A big thanks to Sara for making time to chat with me! Find her on Goodreads, Twitter and her website.

This is a great book so make sure you enter and spread the word!