When fifteen-year-old Clary Fray heads out to the Pandemonium Club in New York City, she hardly expects to witness a murder - much less a murder committed by three teenagers covered with strange tattoos and brandishing bizarre weapons. Then the body disappears into thin air. It's hard to call the police when the murderers are invisible to everyone else and when there is nothing - not even a smear of blood - to show that a boy has died. Or was he a boy?

This is Clary's first meeting with the Shadowhunters, warriors dedicated to ridding the earth of demons. It's also her first encounter with Jace, a Shadowhunter who looks a little like an angel and acts a lot like a jerk. Within twenty-four hours Clary is pulled into Jace's world with a vengeance, when her mother disappears and Clary herself is attacked by a demon. But why would demons be interested in ordinary mundanes like Clary and her mother? And how did Clary suddenly get the Sight? The Shadowhunters would like to know....

City of Bones was an absolutely amazing book, a great start to the Mortal Instruments series. At first while reading descriptions, I thought the supernatural element of the book would be too much for me. There seemed to be a million different creatures, which would be a little overcrowding and confusing. But I loved it. No one element was too overpowering. Perfect amount of subtle, playful romance, perfect amount of action, perfect amount of plot, perfect amount of character development/history and perfect amount of mystery made for a magnificent and gripping read.

With that out of the way, it's time to gush. Jace - egotistical and cocky. Would I slap someone like this in real life? Yes. Would I want to snag Jace as my boyfriend? Yes. Confusing, huh? No really, Jace is a good-hearted and sweet guy on the inside. Even though he doesn't have the most desirable traits, Cassandra just made it work. I don't think it's possible to not fall in love with him! His witty lines and charming personality reel you in and leave no room for argument. Who's Simon again? (…Clary's best friend who's not-so-secretly in love with her, by the way!)

Clary + Jace = perfect couple. Who expected the ending? Definitely not me, and you won't either. City of Bones will leave you shocked and scrambling to get the sequel!

As you probably know, City of Bones will be turned into a movie. We all know that book to movie adaptions usually pale in comparison, but let's hope the Screen Gems team do a good job. 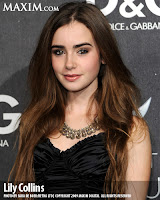 Lily Collins has been cast as Clary, and the other main characters should be cast soon as filming apparently starts in early May.

Today she tweeted that she received a book of renderings for set pieces! One of them...the midnight carriage. 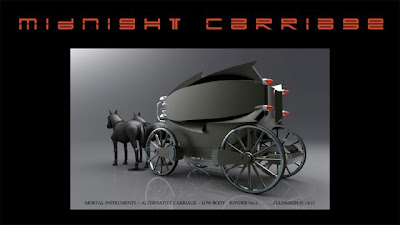 How great does it look and how excited are you that this is really happening?! Follow Lily at her Twitter (which is specifically for TMI) to keep up to date with news!
Posted by Lisa at 10:27 PM