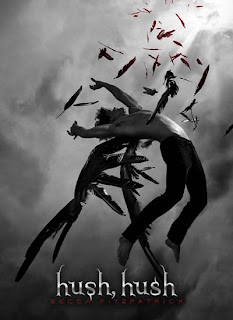 I actually received Hush Hush from a contest I won, held by my friend Liyana at her blog. It was a gorgeous signed hardback and I was so excited to have gotten my hands on it.

The book centres around a teenage Nora and her new crush Patch, who we later find out is a fallen angel (if you didn't gather from the cover already). She is drawn to the mysterious new kid in her biology class and from there, their relationship turns into a dizzying roller coaster ride; fun but potentially deadly. Throughout the course of Hush Hush, Nora is faced with a series of terrifying encounters and can't decide whether she can trust Patch, her friends, or even herself.

I found this to be a very enjoyable book. Sexy fallen angel? Yes, please. Patch isn't your typical bad boy, one that's just flirty and does dangerous things. Patch does flirt and continuously makes sly comments but there's no escaping the true darkness that lurks inside of him. We don't see the full extent of this or get to know much of his backstory, but enough is given and hinted to make us beg for more. All of the little mysteries and odd occurrences in Hush Hush ultimately led to an amazing last chapters. I was on the edge of my seat and those last few pages had me panting for more.

Hush Hush is an adventurous, sexy and dangerous ride. Which side will you choose? Enjoy the fall.