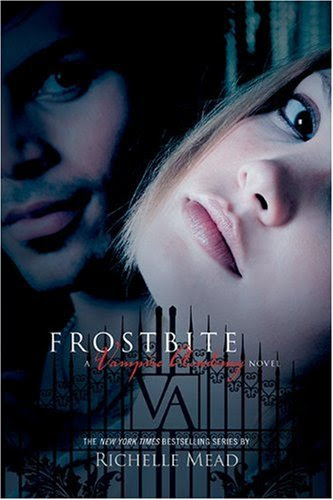 I really enjoyed the second book of the Vampire Academy series. In this novel, the Strigoi are closing in on the students of St. Vladimir's as they go away for winter break. What better way to eliminate some royal Moroi than to attack while they're all together with their defenses down?

The thing that set Frostbite apart from the previous book is that we got to see another side of Rose. While I do enjoy seeing her reckless and wild, it was a nice change to see her be so grown up and mature! Who would've thought that Rose Hathaway could be a responsible leader?

I really loved the plot in this one. I was on the edge of my seat at many points of the story. In the opening scene, Rose is being tested on her abilities as a guardian, or so she thought. Things don't go quite as planned and it makes for a very creepy start.

You know what else I loved? Meeting Adrian Ivashkov, one of the royal Moroi. He is one sexy and loveable character. Who didn't giggle a little at his flirting attempts? I fell in love with Adrian the moment he stepped onto the page. He was a great distraction, too, from the Rose/Dimitri heartfail that was in this book! Read at your own peril.