I was so excited to get this in the mail. There was some fangirling and a little screaming, all while frantically pulling at the flaps of the box it was encased in. For a whole week before receiving my copy, I had heard only fantastic things, so you can understand my excitement! After my initial excitement and gazing at the shiny book jacket, I finally started reading. It was not put down until past midnight.

Crescendo sucked me in right from the beginning. The novel opens at Delphic Beach, where Nora is spending a nice day out with Patch. After a nasty encounter with Queen Bee, Marcie, Nora is feeling quite put out and seeks the comfort of her boyfriend. After some steamy moments in his car, Patch abruptly flees, leaving Nora to wonder whether it was only an excuse to leave or whether something was really happening. Unfortunately, this marks the start of her insecurity which follows her throughout the entire book.

New characters are introduced, the backstories of some characters are explored (yes, Patch!), mysteries are made known, lives are in danger. Typical Becca, yes? I felt a myriad of emotions whilst reading Crescendo. Happiness, sadness, anger, frustration, passion, shock, fear…the list goes on! We are once again taken on a rollercoaster ride as Nora is thrown, yet again, into a tangled web of mysteries. Many aggravating misunderstandings occur but it's bearable. In small doses. Take a few breaks instead of giving Nora and Patch some rough treatment and you'll be fine.

So, what do you think will be on the cover? What will Silence be about? How will it all end? Let me know in the comments! 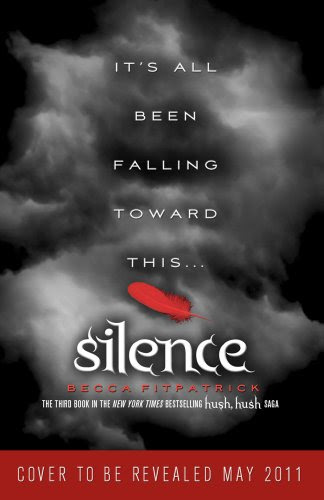