Review: Through the Ever Night by Veronica Rossi 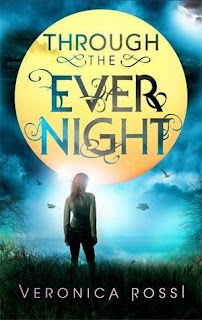 Aria has struggled to build a life for herself outside Reverie. It hasn't be easy adjusting to life in the wilderness but that struggle has been worth it with Perry by her side. But Perry has other challenges. His people are looking to him for answers. Answers about what happened to his nephew and what's happening to their world. And they don't trust the priviledged Aria, one of the enemy, in their midst. Soon he'll be forced to chose between the tribe that looks to him for leadership and the girl that looks to him for love.

As breathtaking as the first book of this addictive series, Through The Ever Night sees Rossi taking us on an intense adventure where her characters blossom and fully come into their own. While Perry must gain the trust and support of the Tides as their new Blood Lord, Aria and Roar take off together in search of the location of Still Blue. With Consul Hess's threats and the vicious Aether storms raging stronger than ever, destroying everything in their path, it's imperative that they find the safe haven before it's all too late.

After months of being apart, Perry and Aria are finally reunited, but their time together is sadly short-lived. Aria must leave to find Sable, Blood Lord of the Horns, for information about Still Blue, and Roar accompanies her knowing that Perry has his own important duties to attend to. Ever since he took over from his brother, Perry's tried to do right by his tribe but has failed to prove himself in their eyes. As he struggles with the lack of food, increase in Aether storms and vulnerable village, the people question his authority and believe he's too young and inexperienced to be a good Blood Lord, but by the end of the book, Perry has grown by leaps and bounds. He becomes a leader who can look after his people and command their respect like Vale once did. I was so proud of him! These tribe folk were STUBBORN and so he truly had to earn every ounce of their trust.

Aria was an amazing heroine. She's always been strong and likeable, but she's adapted to the Outside like a fish to water. No longer is she a delicate Dweller (not that she truly was to begin with), but someone who'll do whatever it takes to protect those around her. Unfortunately, others don't see it that way. To them, she's just a Mole. In the short time that she's at the Tides, she's treated harshly and gains acceptance from very few, but to her credit, it doesn't stop her from trying and I think it made Perry love her even more! Being separated, their romance was far from perfect (let's not mention that annoying little Kirra witch, shall we?) but I know things will be just fine in that camp. We see the terrible prejudice that exists between the Dwellers and Outsiders, but I'm looking forward to seeing this gap be bridged in the future!

Along with the fantastic character development which made me love them all the more, the relationships received the same treatment. The one I loved the most was absolutely between Aria and Roar. Their bond was so refreshing and uplifting, fun and loving at the same time in a completely platonic way. I adore the way they protect each other and have such a strong relationship without it crossing over into more, despite what others may think! After Liv ran away and disappeared to avoid marrying Sable, Roar's been missing a piece of himself even with Aria offering her shoulder to lean on. His yearning for his soul mate yanked at my heartstrings and I felt every little bit of confusion and sorrow that he did when it came to her. The poor thing probably had it the toughest out of all of them. I demand a group hug for him now!

While the Outsiders are racing against the clock to dodge the Aether, the Dwellers surprisingly are too. Slowly but surely, the once perfect Reverie is being destroyed, which is why Soren's father is so desperate to find Still Blue. After Soren reveals his plans to go Outside, a deal is made so that Aria will help him if he gives her information, and what they discover about the Consul's plans is horrifying, yet very exciting plot-wise. I didn't expect to like their friendship at all, but I'm really hoping to see more of it in the next book! Rossi loves turning enemies into friends, doesn't she?

Through the Ever Night was a thrilling read that didn't disappoint in the action department. Full of mystery, anticipation and possibly fatal situations, the plot only intensifies from Under the Never Sky and this sequel certainly isn't that boring bridging book we all loathe. In this second instalment, every character had their own personal issues to deal with but still had the time to help others. What a sight it was to see. I have such a warm place in my heart for these guys and I'm so looking forward to seeing how things progress in Into the Still Blue. Things are finally in place and everything's been leading up to this, so I'm expecting the best book yet!

Of course I prefer the American cover (HELLO PERRY!) but the Australian one is gorgeous too. What do you think? I'm very excited to see what they come up with for Into the Still Blue!!


Find Veronica on Twitter, Goodreads, Facebook and her blog.
Buy Through The Ever Night from Amazon, The Book Depository, Booktopia and Barnes & Noble.