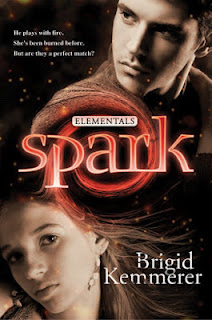 Gabriel Merrick plays with fire. Literally. Sometimes he can even control it. And sometimes he can't. Gabriel has always had his brothers to rely on, especially his twin, Nick. But when an arsonist starts wreaking havoc on their town, all the signs point to Gabriel. Only he's not doing it. And no one seems to believe him. Except a shy sophomore named Layne, a brainiac who dresses in turtlenecks and jeans and keeps him totally off balance. Because Layne has a few secrets of her own...

After I fell in love with Gabriel in the first book of the Elemental series, I was ecstatic when I discovered that Spark would be focusing on the hottest Merrick of the bunch. While Storm was entertainment in it's purest form as we're first introduced to the world and characters, Spark takes on a much darker tone as we delve into Gabriel's mind; a word of warning, it's frightening in there. Luckily for him, he's got a nice girl to keep him distracted and boy was this romance incredible! As spellbinding as you would imagine it to be, Spark is an absolute must-read!

Gabriel Merrick. Gabe. Gabe. Gabe. Gabe. Gabe. How can you not love this gorgeous, witty bad-boy? In the previous book, he was perceived as someone who was easy-going and didn't have things too tough. He seemed to have his life under control and wasn't lacking much at all. After reading Spark…… I can say that we were all terribly wrong. The main issue that's explored within this novel is Gabriel's relationship with his family and how he sees himself. Although it wasn't obvious until now, he's the black sheep of the family, the brother who's always expected to make mistakes and do the wrong thing. Further and further, he and his brothers drift apart, especially him and his twin, Nick. Kemmerer will have you clutching at your heart with this book. The amount of sympathy and frustration I felt at the unfairness of EVERYTHING was indescribable. Gabriel's such a good person with a big, vulnerable heart who didn't deserve a single bit of hurt he was smacked in the face with. What makes it harder as a reader is that many of the conflicts could have been avoided and were caused by a lack of good communication, whether it be Gabriel's unwillingness to explain himself (because he couldn't believe that he even had to) or his brothers' complete lack of faith in him! You can expect this sequel to be full of angst, which just builds and builds. I'm a total wimp with these things but I got through it. Somehow. I'm still recovering, I think.

While Spark doesn't go much into the Elementals/Guides storyline that was set up in the first book, there is some development in the way of Gabriel's powers. Although as a pure Elemental his powers are strong, there are still limitations with what he can do; while he can manipulate fire with great precision, he can't create it himself. In his attempts to remedy this, he causes a fire or two and winds up going into a few house fires too! This allows him to save people and gain more control, but it also brings a lot of heat onto him from his family and the police. Someone else is starting these fires with an unknown agenda and it's not a good thing for him to be at the scene of every crime. I will say though, that the bromance which formed between him and Hunter as a result of these rescues was great. BEST FRIENDS FOREVER?

Now you've all been waiting to hear about it…the romance. Firstly, I have to say that Layne Forrest is one of the coolest people ever. Her character was so refreshing amongst the stream of "average-nothing-special" YA girls we're used to seeing who have no reason to be suddenly noticed by the hot guy. She's smart, conservative, horse-loving and…a social outcast. Even though she's been rejected by her mother for not being perfect, ignored by her father and ostracised from her peers for being "weird", she stands by what she believes in and even has a kind heart to boot. The first time she and Gabriel meet..it's not friendly but you just know that the romance will be unbelievably good. Layne does the sweetest thing in the history of sweet things and I still go into mushy mode when I think about it. It's no wonder that Gabe couldn't help but fall for her eventually! She understands him and doesn't confine him to being a good-for-nothing guy like everyone else. Their road to happiness isn't easy in the slightest, what with both of their secrets, but wow. Amazing. Layne's deaf brother, Simon, and her secret, which I won't spoil, made their relationship unique and gave Gabriel many opportunities to make us SWOON.

I want to see the Merrick family back together as one so badly, and with the developments at the end of this book, I think they're on their way. I'm looking forward to seeing how the Elementals/Guides plot plays out in Spirit, and it should be interesting with the switch to Hunter's POV. We won't be seeing the Merricks from an insider's perspective anymore but I've always loved Hunter so I don't mind at all! Kemmerer has really stepped it up and taken this series to another level with Spark. I can't wait to see what she offers up next.