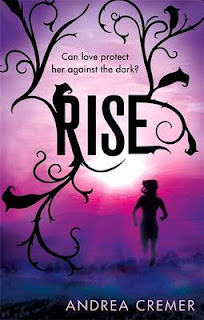 Everything Conatus stands for is at risk. Hoping to gather enough resistance to save their order, Ember and Barrow attempt a desperate escape. But fate offers little mercy. When their mission is exposed, the  couple face relentless pursuit by the supernatural horrors that act on the commands of Eira’s ally: the mysterious Bosque Mar. A shocking revelation forces Ember out of hiding, sending her back into the heart of dark magic at Tearmunn keep, where she must convince her old friend Alistair of her love or face dire consequences. Ember’s deception offers the only chance for the resistance to succeed, but what she discovers in the shadows beneath the keep will shatter her world and bring about the Witches’ War.

Although I failed to feel the urgency to continue reading until the last quarter of the novel, when the pace and intensity finally increased, Rise was still far better than Rift. Despite the slow and sometimes lacklustre read, I'm really glad I finished it because this is, mind-bogglingly, a great prequel series.

Rise begins where Rift left off as Ember and Barrow flee from Tearmunn, which has now been overrun by Eira and Bosque Mar. Alistair is their loyal solider and is still delusional in thinking that Ember returns his affections. While I wasn't glued to the book and desperate to continue reading, hence I was easily distracted and took an entire week to finish it, the plot was actually interesting and far better than that of Rift. We're exposed to the darkest parts of this world and finally Eira's actions are part of a bigger picture. Luckily for me, the annoyance I felt towards her in Rift wasn't present while reading this novel. Perhaps it was because we read from Alistair's perspective more than hers, but no matter, I'm very grateful. Alistair was terribly misguided and on such a wrong path that I felt like checking to see if his manhood was still in tact. Until he gets over Ember, he's a lovesick pup who wants approval and will do whatever he's told, especially if it means it'll get him Ember. The antagonists were a great part of this novel, however, and I enjoyed seeing the evil plans they conjured up throughout.

This time around, I felt that Ember wasn't as gung-ho warrior as she was in Rift, and was a little disappointed that she had somewhat reverted back to a 'girl' mentally, despite the things she said otherwise. I enjoyed the romance between her and Barrow and was pleased that it didn't dominate the story at all. The character development honestly wasn't the best - I don't think anyone grew significantly or let us know more about themselves - but I enjoyed having such a large and diverse group to pull from anyway, even though their roles were minor and undeveloped.

Within this book, there are loyal followers, rebels, traitors and moles. Both sides have their own agendas and ideas about how things should be run, and it's all a tense wait to see who will come out on top. Will the rebels against Bosque succeed in banishing the evil beings or is he already prepared with something much more sinister? Now this part, I loved. I was addicted by the end of the novel and it's here that I realised how great this prequel truly was. It wasn't until the end that I realised that the things we were learning were directly related to the original Nightshade series. Some were intended to be revealed at the end, but some were just so slow to register in my mind (cue facepalm). This last minute revelation hit me all at once, rather than naturally a hundred pages earlier, so my mind was a little blown and fangirl excited by that time. FEELINGS OVERLOAD.

This prequel series is probably one of the best in terms of explaining the origins of things within the original series. While the story and characters certainly don't compare to those such as in The Infernal Devices, I enjoyed the insight I got from it and seeing how everything fit together. But as epic as the ending was, I'm left feeling a little empty because it was so open ended, and not in a good way where we can happily imagine things ourselves. Many threads are left loose and untied, and I still have questions! Basically, I have no idea what every character is up to. Are all the villains alive? How will Eira, Alistair and Bosque proceed? Did his plan work? What about the other members of the order? What about Ember and Barrow?! I'm just lost. I guess we have a very vague idea about some things with the knowledge we have from the Nightshade series, but I'm not entirely impressed with the lack of a proper ending here... An extra page, or paragraph even, would've done the trick!

Was I the only numbnut reading this novel? I cannot believe I didn't realise _____ ("spoiler") the minute the idea was introduced. HELLO LISA. THIS IS A PREQUEL SERIES. *groans* Wow. If I had plainly stated what it was that I missed, rather than "_____", you would be on your knees laughing. I can't believe this LOL.

Find Andrea on Twitter, Goodreads, Facebook, her website and blog.
Buy Rise from Amazon, The Book Depository, Booktopia and Barnes & Noble.
Posted by Lisa at 4:13 PM