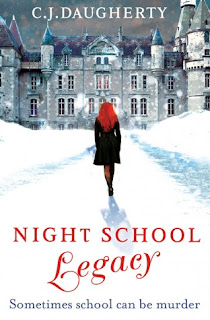 In the last year, Allie's survived three arrests, two breakups and one family breakdown. The only bright point has been her new life at Cimmeria Academy. It's the one place she's felt she belongs. And the fact that it's brought the dreamy Carter West into her life hasn't hurt...But far from being a safe haven, the cloistered walls of Cimmeria are proving more dangerous than Allie could've imagined. The students, and faculty, are under threat and Allie's family - from her mysterious grandma to her runaway brother - are at the centre of the storm. Allie is going to have to choose between protecting her family and trusting her friends. But secrets have a way of ripping even the strongest relationships apart...

Night School was easily one of my favourite reads of 2012, and although Legacy isn't quite as good, I still found myself loving it. Daugherty's writing is addictive as always, and you'll pass a large handful of hours reading this without even realising it. Upon starting, I immediately connected with the characters I loved so much again and it was like the year-long wait never existed.

When Allie Sheridan went back to London for the holidays, she didn't expect to be chased down by a group of Nathaniel's agents, or to be returning to Cimmeria Academy early to help repair fire damages caused by her brother, Christopher. At first, things seem to be going well. Allie and Carter are super adorable and sexy, and there's some funny awkward tiptoeing around Sylvain, since he saved her life post-rape attempt. Unfortunately, our smiles don't last for long as things quickly spiral out of control. The secrets, misunderstandings and total lack of communication are monumental in Legacy. As much as I love Allie and Carter, I don't know whether to bury my head in the sand in defeat or to run away screaming.

In this sequel, the plot thickens as Nathaniel's motives are explained, and as he takes bigger risks in order to get what he desires, the students at Cimmeria are put in unpredictable danger. As a result, Allie is admitted into Night School where the focus is now on self defence and they soon learn that there's a traitor amongst them. One of the members of Night School or staff is Nathaniel's inside spy and so the Night School students are forced to interview another member assigned to them in search of any inconsistencies, with lying leading to expulsion. It sounds simple enough....BUT OF COURSE NOT, THIS IS FICTION!

This leads us to the dirty, frustrating mess that is Allie and Carter's relationship. Not too far into Legacy, Carter transforms into an overprotective, controlling jerk who completely forbids Allie from seeing Sylvain. They can't be friends or even acquaintances. With Sylvain's past behaviour, I understand his concern but this was too much and clearly NOT just about her safety at all. Carter, come here so I can slap the stupid out of you! Unfortunately for us and Allie, everything snowballs from there. Allie's put in difficult situations with horrible timing, and absolutely nothing works out for her, with Carter or her non-Night School friends! My heart was an ugly little mess by the end of this novel. I feel so much for her, even though at times I felt she needed to be slapped too. Everything that happened with Allie was either wrong or unfair and it was horrible! #AngstWimp

As a character, I really did like Allie (for the most part). She does well in Night School, albeit with a shaky start, and tries her best to solve all of the mysteries around her while dodging Gabe who seems to be popping up everywhere. The small clues combined with the subtle foreshadowing and my halfway-there theories have me curious and desperately awaiting the next book. Legacy seems to pose more questions than answers, and I was a little let down that the plot development wasn't huge. I was hoping for a bit more to happen, for a few more answers to come our way, but sadly it looks like that'll have to wait for book three.

Despite all of the heartache Daugherty made me feel, she still managed to keep me laughing with her well-placed moments of wit and humour, and her captivating story will keep you wanting to know what will happen next. Legacy gives us more insight into some of the characters, especially Carter, while making us distrust others. This novel feels somewhat unresolved because of the sheer amount of unanswered questions, but filled with intrigue and dangerous charm, Legacy is an entertaining sequel which will hopefully pave the way to an explosive third book. I have no idea how things will end and I'm honestly a little afraid after these latest developments!

Have you read this series? What did you think?