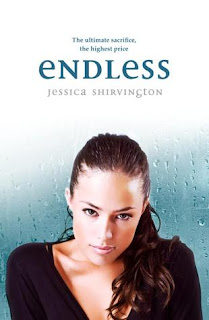 Angels are real. They aren't always kind. Violet Eden is certain of all this because she is Grigori - part angel, part human. She has felt the influence of both light and dark. When Hell unleashes its worst, Violet must embrace every facet of her angel self to save the people she cares about and the world as she knows it. But death is not the worst thing that Violet will face. For her, the endless question 'Can love conquer all?' will finally be answered.

Warning: Mild spoilers in the first two paragraphs if you haven't read the previous book, Emblaze. If you need a push to start/continue this series, I strongly suggest you read the last two paragraphs!

Up until now, we've believed that Violet's mother signed her daughter's human life away in exchange for a life of her own in Heaven. After Phoenix used the Exile Scripture to release Lilith from Hell in Emblaze, Evelyn has magically returned, and Lilith has since been busy using the Grigori Scripture to kidnap children who are destined to become Grigori. As if things couldn't get worse, Violet is summoned to the Academy for her formal Grigori assessment in New York, where Lilith and Phoenix are conveniently lurking.. Get ready for the most epic book yet, as our favourite characters tackle a multitude of tricky obstacles.

First of all, the focus of family in this book was great. In the first three, things are very much focused on Violet's secret life, while her father is absent and left in the dark. In Endless, the gang are forced to reveal the truth to James with Evelyn's surprise return. One of the best things about this book was Violet's relationship with her parents. Everything Violet believed about her mother is challenged, but the thought of admitting that her anger and bitterness all these years was misguided is just too painful to bear. James has spent many hard years dealing with Evelyn's "death" and this bombshell could be one too many for him. Sides are chosen, emotions are toyed with… When will these guys get a break?!

Violet and Lincoln have been fighting their feelings for what feels like years now, but there seems to be some light at the end of the tunnel for them in Endless. Although Grigori partners aren't allowed to fall in love because it will weaken them and risk their lives, there's now implications that their bonded souls will make them stronger. Endless questions aside, the romance was AMAZING. They let go more than they ever have before and give us some delicious scenes as a consequence. There's also a constant inkling of hope now, hope that they may finally be able to be together.

Aside from Lincoln and Violet, Phoenix is my favourite character. For multiple reasons, it broke my heart to see so many glimpses of a good Phoenix while Lilith was behind him, pushing his hand to do terrible things he wanted no part of. With every bit of help he gave Violet and genuine exchange of emotion they had, I died just a little. Although he's done so before, he truly proved in Endless that he honestly loves and would make sacrifices for her. (After one scene, I wanted to crawl away, cry and die. You'll know what I'm talking about when you read this book!)

To put it simply, this book was perfection and it's impossible for me to be happier that there'll be two more books in this series. Three or four wouldn't have been enough with these magnificent characters.  I can truthfully say that every book in this series is better than the last so if you liked Embrace at all, don't you dare stop reading this series! For readers out of Australia, be patient. It's so worth it! In two words: MY EMOTIONS!! There's always something happening in Endless. Everything is captivating and Shirvington delivers one shock and revelation after another. When I'm not holding my breath from the intensity, I'm tearing up and attempting to hold my heart together. Shirvington's writing has never been stronger. How can you not be in awe of how easily she juggles tense fight scenes with ones of friendship, tender love, and pain and sacrifice?

Endless will keep you guessing until the very end. I don't think I've been shocked into silence so many times in one sitting. The last few chapters of this book…you'll be sweating bullets guaranteed. With such an evil antagonist as well as mystery surrounding what will happen to the main characters, it's a given. Fair warning, the ending is brutal. We're put through the ringer for so long and by the end, BOOM. Unbelievable. Is the human body equipped to handle this?!

I know. A long, gushy, nonsensical review. But you must read this series. MUST.