Review: The Selection by Kiera Cass

Warning: I read this book two months ago. I haven't written a review in two months. This could be the dodgiest review ever written, who knows. Bare with me... 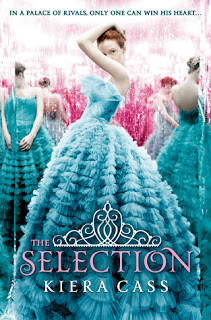 Thirty-five beautiful girls. Thirty-five beautiful rivals… It’s the chance of a lifetime and 17-year-old America Singer should feel lucky. She has been chosen for The Selection, a reality TV lottery in which the special few compete for gorgeous Prince Maxon's love. Swept up in a world of elaborate gowns, glittering jewels and decadent feasts, America is living a new and glamorous life. And the prince takes a special interest in her, much to the outrage of the others. Rivalry within The Selection is fierce and not all of the girls are prepared to play by the rules. But what they don’t know is that America has a secret — one which could throw the whole competition… and change her life forever.


If we reverse this story, it's every girl's fantasy, right? A group of the very best men, vying for your love and hand in marriage… Well, sorry, that's not what happens in the real world…...unless you get accepted into The Bachelorette: Elite or something.

Very reluctantly, America Singer is thrown into a competition designed to pit girl against girl in the most extravagant setting. While The Selection would be the greatest opportunity for any other girl, America sees it as her own personal form of hell. Catty princesses, snobby royals and excess? Who needs to go through all of that for a husband when they already have a beautiful boyfriend at home? Right?! So really, no one could have predicted the bond she would form with 18 year old Prince Maxon…

I know this book didn't hit the right notes for everyone who read it, but I absolutely loved it. The awkward and sweet relationship between America and Maxon had me reeling, even though they were just acquaintances slash friends for the most part. Although strongly against it, America eventually accepted the spot as a sacrifice to give her family a better life. If she wins the competition, they'll become Ones and live easily, rather than desperately as Fives. After greeting the show's fans and viewers, America is shocked when the rest of the nation take an instant liking to her, enamoured with her authenticity and kind heart. She stands out amongst the group of Barbies and, I can assure you, Maxon takes notice even though she's not what he's looking for at all… (or so he thinks)

I could have stayed in this world FOREVER. You'd think that I wouldn't fall in love with someone who was so uptight and controlled. That I would never abandon Aspen, the loving and dedicated guy back home who's ready to tie the knot. Well. I can't explain it either, but that Prince does silly things to me, even when he's not trying. He makes mistakes and then does the sweetest things. His behaviour is carefully planned to impress his ladies, yet unpredictable and natural at the same time. The two sides of Maxon are a delicious contradiction but the complete package is oh so loveable. I love the way that Cass was able to incorporate Aspen into the story, seeing as America was locked up in a secure mansion far away from home! Ooh, makes you wonder.

The Selection will probably not be what you're expecting. It's entertaining and lighthearted, yet intense and emotional at the same time, and the entire process of the competition thus far has been immensely exciting. I would give away a million babies for the second book right now so I can dive back into the girly politics and check out what's happening in Love Triangle Land. All of Kiera's characters are unique and wonderful, whether they were intended to be likeable or not, and for me there wasn't one unenjoyable moment. This book is full of friendship, blossoming romance, girl rivalry, action (yes, the dangerous rebels vs. royals kind) and intentionally-messing-with-your-feelings moments. I couldn't have asked for a better "Royals" story. One Prince. Thirty five girls. One wife-to-be. One seriously amazing book.


Okay, let me apologise again in advance. This review is on drugs (SORRY KIERA) but I don't feel too guilty because I'm sure many of you have read this book already. Do you share my love for it or....?

See you all on the weekend for All Hail The Mail! I'll explain my long absence then ;)