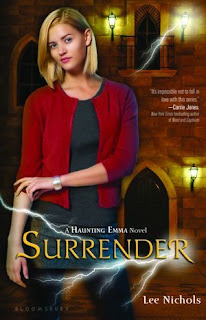 After a devastating battle at headquarters in New York, the ghostkeeping world is in shambles. When Emma and Bennett return home, they are determined to defeat the wraithmaster, Neos, forever. But it's not going to be easy. Bennett's parents kick him out when they realize he is still using drugs to enhance his powers. Emma is convinced her aunt has come back from the dead to warn her of a new threat. And worst of all, Neos is using wraiths to possess the students at Thatcher Academy. If the ghosts manage to take over the entire school, even Emma won't be strong enough to stop them. But if either she or Bennett sacrifice his or her powers, they might be able to save the ghostkeeping world once and for all-and break the "ghostkeepers lose their powers when they fall in love" curse. The question is: who will be the one to surrender all power?

After three books, this much loved series has finally come to a close. The previous book ended with Bennett being addicted to the drug, asarum, and Emma trying to prevent it from tearing apart their relationship. Neos continued on his rampage to destroy the ghostkeepers but the final battle is now just around the corner… I felt that Surrender lacked something I can't put my finger on in the character department, but it still delivered on the humour and entertainment.

It was interesting watching the romance between Emma and Bennett develop over the series. Their love was initially forbidden because Bennett was her brother's best friend, and then because of the fact that only one ghostkeeper in the relationship could keep their powers. It's been an uphill struggle, with some sweet moments thrown in, but things reach the peak of crazy and confusing in Surrender. One minute, they're making out (and continuously getting walked in on by their parents…awkward…) and in the next they're all angsty with the issue of Bennett's drug addiction. I couldn't help but want to smack him in this book! Yes, he had good intentions but his attitude just didn't sit well with me. Now would be the time to growl at asurum's evil side-effects... As it was the last book, I was expecting them to get back together pretty early on but Nichols does a good job at making us wait! I wanted their love to be stronger and more prominent in this story, but overall I'm pleased with how things turned out for them.

The creep factor gets amped up many notches as Neos becomes desperate and steps up his own game. The gang concludes that he's going to go after his remains so that they can't be destroyed by others. When? Where? Who knows! Everyone's on their tippy toes. A race to find them ensues, people get possessed, Emma has strange visions and Bennett begins keeping (more) secrets. What's everyone up to? Of course, I'm not telling you because you deserve to be kept in the dark too! I really enjoyed the final few fight scenes. As always, they were exciting and had great build up.

Surrender's final chapter is beautiful and very satisfying. Every character gets their shining moment, whether it's a bittersweet farewell or a look at the great things awaiting them, and every little end is tied up neatly. Although it's sad for me to let these wonderful characters go, I'm happy to know that they're all in good places now, wherever that may be in the world. I definitely recommend this series to those who want a fun adventure, even though this last book didn't blow me away ;)

Am I the only one who's disappointed that the AU cover matches the US set? WHY? I strongly dislike owning books that don't match LOL.

What did you think of this series? :)

Find Lee on Twitter, Goodreads, Facebook, her website and blog.
Buy Surrender from Amazon, The Book Depository, Booktopia and Barnes & Noble.
Posted by Lisa at 9:30 AM