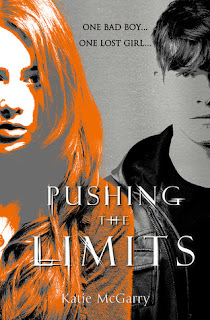 No one knows what happened the night Echo Emerson went from popular girl with jock boyfriend to gossiped-about outsider with “freaky” scars on her arms. Even Echo can’t remember the whole truth of that horrible night. All she knows is that she wants everything to go back to normal. But when Noah Hutchins--the smoking hot, girl-using loner in the black leather jacket--explodes into her life with his tough attitude and surprising understanding, Echo’s world shifts in ways she could never have imagined. They should have nothing in common. And with the secrets they both keep, being together is pretty much impossible. Yet the crazy attraction between them refuses to go away. Echo has to ask herself just how far they can push the limits and what she’ll risk for the one guy who might teach her how to love again.

Pushing The Limits is an addictive contemporary that is one of my favourite reads this year. The complex characters are impossible not to love, and it's highly likely that you'll attempt to read this all in one sitting. Whether you're in it for the intense romance or the heartbreaking story, this book definitely won't disappoint!

Echo Emerson used to be popular. With her gorgeous red hair, ample cleavage, creativity and intelligence, she had everything going for her. Until she woke up one day and found horrific scars on her arms. She can't even remember how she got them but we discover that her estranged mother was somehow involved. Echo's brain has repressed the frightening memories and she now undergoes therapy with her pushy father and young, home-wrecking stepmother, Ashley, to try and uncover the truth. Her parents are unhelpful and unsympathetic to her situation, pretending that everything is fine and that she just needs to forget and move on. Her father focuses solely on Ashley and their coming baby, seemingly ready to move on with a new family. My heart broke for Echo. She has negligent parents, her schoolmates treat her like a cutter and her friends beg her to be "normal" again, the way she was before her social status took a nosedive. Ouch! Echo's an amazing character and I loved the strength she possessed. We get there eventually ;)

Noah Hutchins is a shameless manwhore and his first few encounters with Echo are not friendly. At all. As a guy who's been shuffled around foster homes and not been given a fair go, he's jaded and assumes that she's a spoilt rich kid with stupid problems when he sees her in the social worker's office, but begins to think otherwise after he sees her scars. Noah's transformation was stunning to watch. Although his attraction to Echo's…assets…is immediate, he learns a little bit more about the mysterious and complicated girl with every encounter. He treats her with an understanding and gentleness that no one else has before, but also makes a lot of mistakes with her, due to the way he's used to behaving. Both go on a bumpy learning experience together, healing themselves and each other in the process. They're a beautiful couple and perfect for one another, despite both having their own issues and flaws.

Noah's almost as complicated as Echo. After his parents died in a house fire, he was put into foster care and soon labelled as violent after he prevented his foster dad from abusing his own son. No one stood up for Noah and he lost his two younger brothers to another family as a consequence. He now only gets the occasional visit, but has his mind set on getting them back after he turns 18. Here we introduce the issues of whether or not the foster family is mistreating his brothers like he suspects, how Noah will support them and if he'll be granted custody at all. He's learnt not to trust people and I felt so relieved when Echo began to change all of that. He couldn't have been more supportive and caring for SO MANY REASONS. This book is long so I can't even go into details but…trust me. His list of "boyfriend achievements" is endless.

So by now, you know that the romance is epic. Sexy, romantic, emotional…is there any better kind? It is miles deep, thanks to the time and effort McGarry put into writing well-developed and realistic characters. If you're wondering how the two get pushed together, Echo wants to restore her dead brother's car and needs her own money to do so. Noah needs to put more effort into school to prove that he can support his brothers in the future. Solution? Tutoring! Their sessions with the social worker also play a big part in their relationship and the plot, but again, I won't spoil ;) The mystery in Pushing The Limits is deliciously good and I loved unravelling the pasts of these characters. Have fun theorising and trying to predict the twists!

As you can gather from my long-winded and probably nonsensical review, I thought this book was all kinds of fantastic. Everything McGarry attempted to do worked perfectly and I can hardly praise this book enough. While she'll crush your heart, she'll fill it with the most satisfying feeling of love too. Pushing The Limits has their perfect amount of backbone, heartache, cuteness, angst and love to please anyone. The themes are obviously quite heavy but gosh, it's good. I dare you to not to like this book!

If I had it my way, my review would be double this length... I could gush about every little thing for hours and hours! Bet you loved this book too, hmm?