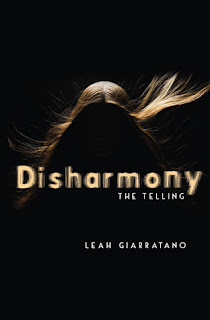 Disharmony was a book that sounded explosive and unique in theory, but underwhelmed me when things came down to business. I expected so much more from this mysterious Telling but was forced to wait for the sequel to see it in action. This first book very much felt like an introduction to the characters before their true problems would be revealed later on. Although I expected and wanted a lot more plot, I did enjoy meeting some of the characters who will be very important to this prophecy coming true.

The Telling is described as a prophecy which foretells three siblings stopping the disharmony in the world, the toxic emotions which have controlled our society for thousands of years. These children will have to be taught about their Calling, as their powers can used for evil without correct guidance, but their mother died during childbirth, leaving them separated and oblivious to the others' existences. Disharmony follows the teens' personal lives as they slowly begin to find each other. The book's concept truly had me bouncing off walls but, as I said before, Giarratano doesn't delve too deeply into the specifics just yet. She begins to lay the groundworks for what should be an exciting sequel and I have my fingers crossed that things will get more interesting! I want to know how they'll eliminate disharmony, who wants to stop them and why! I want to know more about their powers! Oh, I have so many questions...

The first character we meet in Disharmony is Luke Black, a boy who's in juvenile detention in Sydney. He's constantly harassed by the warden and his army of bullies for their entertainment, but one day makes an unlikely friend and ally in Zac, an athletic boy who's a skilled fighter and holds many secrets… I enjoyed the scenes which focused on them the most in this book, as Luke was an intriguing character and I was very curious about who Zac really was. The environment they were in also added to the suspense and anxiety I felt, as they weren't able to act freely, without the fear of being caught and punished. Introduce a random assassin from out of nowhere and things get...interesting.

Luke is the psychopath of the trio and doesn't feel any emotion - he had to learn how to fake it. His twin sister, Samantha, on the other hand, is an empath who lives in a Romanian gypsy camp and works as a tarot card reader. Her exceptional abilities at manipulating emotions and seeing the truth in people, not in the cards, make her a valuable asset to the team and sparks the interest of a gypsy king who has mysterious but obviously sinister motives. Sam definitely has the more confusing storyline of the two, and is more involved in the action. She's chased by ninja assassins and is also wanted by the gypsy king. I'm curious to see what comes out of this, given the information and clues that were left in this book. At the moment, they're all loose threads with no meaning! It was harder to keep interested in Sam's story, mainly because her character was not as developed as Luke's. She's surrounded by many other characters and problems, which took Giarratano's focus away from providing the "bonding time" with her that we were able to have with her brother.

So far, we've only properly met two of the three siblings. I'm looking forward to getting to know the other brother, the genius, as we get glimpses of him as the book comes to an end. That and the twists caught my interest and made me wonder what would happen next, but I'll have to wait for other opinions before I pick up the sequel to make sure that it's as good as I want it to be! I hope it is because the last few chapters of Disharmony put me in an "OMG" loop. Disharmony isn't a bad book. It just lacked the energy and excitement I craved from a storyline like this, as well as characters I genuinely cared about. I had some initial problems with the unnatural dialogue and repetitive "he said she said", but things eventually improved! All in all, this was an enjoyable and comfortable read.

What did you think of this? Are you planning on reading book 2?

Find Leah on Goodreads.
Buy Disharmony from Amazon, The Book Depository and Booktopia.