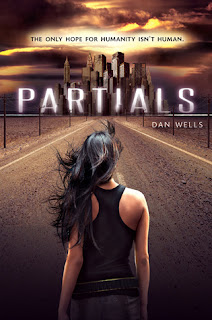 The human race is all but extinct after a war with Partials—engineered organic beings identical to humans—has decimated the population. Reduced to only tens of thousands by RM, a weaponized virus to which only a fraction of humanity is immune, the survivors in North America have huddled together on Long Island while the Partials have mysteriously retreated. The threat of the Partials is still imminent, but, worse, no baby has been born immune to RM in more than a decade. Our time is running out. Kira, a sixteen-year-old medic-in-training, is on the front lines of this battle, seeing RM ravage the community while mandatory pregnancy laws have pushed what’s left of humanity to the brink of civil war, and she’s not content to stand by and watch. But as she makes a desperate decision to save the last of her race, she will find that the survival of humans and Partials alike rests in her attempts to uncover the connections between them—connections that humanity has forgotten, or perhaps never even knew were there.

Where do I even begin? Partials ruffled my feathers so much, I'm surprised I have any left. I can't even pinpoint what exactly made this book brilliant, but I do know that it kept me up until 4am since I couldn't bear to put it down. Kira Walker is a 16 year old intern in the maternity ward, who has yet to see a newborn live for longer than a few days. No one has for years. When her friend becomes pregnant, thanks to the Hope Act which makes it mandatory to conceive when you're 18, Kira makes it her mission to find an impossible cure for RM. How will she succeed when so many experts have tried and failed?

Partials is an exciting and action-packed sci-fi read that I fell in love with immediately. Some may say it's slow to start, due to the detailed explanations, but I loved the world development. 11 years after the Break, it's 2076 and there are only 40 000 humans left. A violent rebel group has been born in response to the barbaric Hope Act and the citizens live in fear of a partial attack. Partials were engineered years ago to fight the humans' war, stronger and smarter than any man, before they turned against their creators and almost wiped out the entire world. Add in the RM virus and its mysterious link to the partials and we have one hell of a story. Wells doesn't shy away from the scientific aspect of sci-fi and I can honestly say that this is one of the most exciting books I've ever read, with its plentiful and heart-racing twists!

Unlike so many young adult books, Partials does not focus on the romance, nor does it try to create one in an obvious manner. Subtlety is key! In the beginning, Kira is already in an established relationship with Marcus Valencio and I enjoyed exploring their bond on multiple levels. I felt like I understood the two well as a couple, even in the short time that they were actually together. I loved Kira as a character! Just as a heroine should be, she's intelligent, brave, loyal and, dare I say, a little stubborn? I think many people will be impressed by the way she handles everything that's thrown at her in this book. Sure, she may sometimes rush into situations but you've got to admire her serious brains.

I'm going to be brief here because I don't want to spoil a single thing, but Kira takes it upon herself to kidnap a partial to study. They're terrifying creatures, as we know next to nothing about them, and I'm guessing I wasn't the only one who stopped breathing whenever Kira had to get close! The highlight of this book is definitely the partials themselves. They harbour many secrets and Kira's interaction with the one she catches is priceless. Don't even get me started on the crazy conspiracy theories that were flying around my head while reading! The partials constantly threw my feelings of disbelief, sympathy and excitement around in a tumble dryer, but there was always a stream of "OMG" looping through my mind.

I must reiterate how addictive the mysteries are throughout this book. Just when we think we've got it figured out, Wells hits us with another bombshell. Other times, we have many bits of information but just can't figure out how they all piece together! What's the key to solving the RM puzzle? Who are the true villains - the partials, the Voice or the government? Who can Kira trust? Partials is a genuine edge-of-your-seat read. Killer partials sneak around with their scary masks and had me screaming "RUN AWAY!" more than once! Wells is a genius and I am so looking forward to reading the sequel after the serious game-changing ending. A truly addictive read, Partials is not one to be missed!

Was this book fantastic or what? Are you excited to read it? ;)