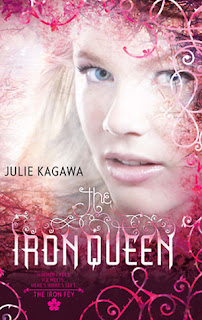 My name is Meghan Chase. I thought it was over. That my time with the fey, the impossible choices I had to make, the sacrifices of those I loved, was behind me. But a storm is approaching, an army of Iron fey that will drag me back, kicking and screaming. Drag me away from the banished prince who's sworn to stand by my side. Drag me into the core of conflict so powerful, I'm not sure anyone can survive it. This time, there will be no turning back.


After being exiled from Nevernever for choosing to remain in their forbidden relationship, Ash and Meghan prepare to return to Meghan's home, with Ash prepared to change his life in whatever way to be with her. He'll go to school, move with her to a big city and even marry her… “You might have to teach me a little about the human world, but I’m willing to learn if it means being close to you.”  Melting yet? It's such a shame that these nice plans are foiled by the fey! What's the iron king up to now?

Once again, the characters are thrown into the deep end and left to flounder. They discover secrets about each other that will make or break their relationships and everyone seems to be in a mean and stubborn mood for a while. I mean, Puck isn't afraid to flaunt the fact that he's planted his lips on Ash's girl! *gasp* However, the most romantic moment in this entire series, and maybe EVEERRRR, occurs in The Iron Queen. I fainted. And squealed. Giggled for a little while before rereading and repeating the entire process all over again. If you weren't sold on Ash before (seriously?) you definitely will be now……

This series is built on an accumulation of dramatic events and puzzling mysteries. Everything comes to a climax when suddenly all of the pieces fall together and things happen at the right place and the right time. The Iron Queen has the most action out of the four books and I loved seeing the two Courts unite to defeat the common enemy, an iron villain who threatens to suffocate Nevernever with his greed. Meghan is forced to take the front seat in this monumental battle and from an invisible teen to a fierce leader, she really has come a long way.

I was kept guessing about something or rather until the last minute. Kagawa even begins to get riddly on us and I've now decided that countdowns of any sort are EVIL. The action and mystery of this book was addicting and intense, earning cries of victory from me when things worked in Meghan's favour. The ending of this book took me by surprise and sort of rammed into me like a mack truck. It's the epic finale - physically, emotionally and spiritually - you always imagine and I felt that it was so fitting for the series. Kagawa left me craving more and I was very excited about getting one more spin with these characters. What a cliffhanger!

Favourite of the series or no? ;)

Find Julie on Twitter, Goodreads, Facebook, her website and blog.
Buy The Iron Queen from Amazon, The Book Depository and Barnes & Noble.
Posted by Lisa at 7:30 AM