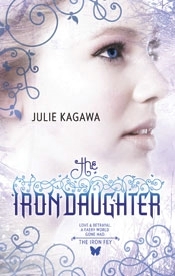 Half Summer faery princess, half human, Meghan has never fit in anywhere. Deserted by the Winter prince she thought loved her, she is prisoner to the Winter faery queen. As war looms between Summer and Winter, Meghan knows that the real danger comes from the Iron fey—ironbound faeries that only she and her absent prince have seen. But no one believes her. Worse, Meghan's own fey powers have been cut off. She's stuck in Faery with only her wits for help. Trusting anyone would be foolish. Trusting a seeming traitor could be deadly. But even as she grows a backbone of iron, Meghan can't help but hear the whispers of longing in her all-too-human heart.


I was very eager to return to this series, excited at the prospect of spending more time in Nevernever after The Iron King's eventful ending. The Iron Daughter is very much about exploring the threats of the iron fey and the growing divide between the faerie Courts, as well as Meghan's personal identity. She's always thought of herself as a human but things have obviously changed and she's beginning to make the transition! The Iron Daughter will please fans who are looking forward to further developing the issues present in the first.

After we fell in love with Ash and Meghan as a potential couple in The Iron King, Puck declares himself a serious contender for his best friend's heart. While I absolutely adore him as a character and would take him as a BFF any day, there's no way he can beat Ash in the smoking hot and emotionally intense department. With Puck, Meghan would have a carefree and fun relationship without having to jump through any hoops or hurdles, whereas being with Ash is like going against the whole world. Somehow, it's all worth it.

We're introduced to many new characters and learn more about those we've heard of before. Ash's brothers are cunningly cruel and Meghan has to firm up her protective shell in order to survive in the cutthroat society of the Unseelie Court. I loved the growth of her character throughout the book. While it isn't as drastic as the changes that come later, she definitely matures. With the Scepter of the Seasons stolen by a secret party, the Courts are at war and Meghan's right in the middle of it. She's able to make level-headed and smart decisions, prepared to do things others aren't willing to. Furthermore, it becomes increasingly obvious that she's now linked to the iron world…

The Iron Daughter is full of angst. Ash is still torn up about Ariella so there's a constant pink elephant into the room. Meghan's walking around on eggshells but pushing Ash for more at the same time, and the misunderstandings between them will have you ripping out your hair! Oh, and let's not forget Puck's little corner of this love triangle. Don't you just wish you could tell characters what to do sometimes? Things would be so much easier! The book is filled with betrayals from both sides and the twists are just as shocking. I felt that the pacing of the book was quite slow, but the action scenes we did get were engaging and thrilling. You never know who's going to win, lose and…die?

As always, Kagawa shocks us with her cliffhanger and makes me thank the heavens that I had the next book on hand. There was so much anticipation, adrenaline and plain shock in the final few chapters. How will the story continue now? What's going to happen next?! Even though The Iron Daughter wasn't a favourite of mine, I still felt compelled to continue and see how the story would end!

Thoughts? Which was your favourite Iron Fey book?

Find Julie on Twitter, Goodreads, Facebook, her website and blog.
Buy The Iron Daughter from Amazon, The Book Depository and Barnes & Noble.
Posted by Lisa at 7:00 AM